Mint produced a set of charts (they call this an infographic) about the state of our retail sector prior to entering the all-important 4th quarter. There are things I like, and things I don't.

What they did well is to produce a separate chart for each key message. 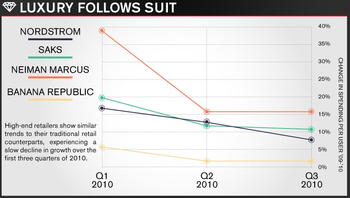 Let's start with the last chart on the poster, which is the simplest and so the easiest to grasp.

The Bumps chart (shown on the right) compares the growth performance of four luxury retailers over the first three quarters of 2010. The text correctly summarizes the pattern as a "slow decline in growth over 3 quarters".

The chart focuses on the change of a change, the "second derivative"; thus, a downward-sloping line above zero indicates positive growth that decreases in magnitude. Just like the Co2 emissions charts (see Stefan's comment), the designer makes a conscious choice to invert our conventional sense of up is positive, down is negative, and would have done well by readers if he had slipped a brief note under the chart.

There is one extra detail -- better to label the vertical axis as "annualized growth rate (seasonally-adjusted)". The seasonal adjustment, as explained here recently, is needed so that every number on this chart can be directly compared to every other number. (The simplest form of seasonal adjustment is taking the difference of this year from the last year, which is what they did here; thus, Neiman Marcus's Q1 sales grew by 40% in 2010, relative to their Q1 sales in 2009.)

The current label, "change in spending per user '09-'10", juxtaposed with the time axis going from Q1 to Q3 2010, confuses and does not communicate.

How can we make a world of difference with a minor shuffle? Put the retailer names in the same order as the lines on the chart. Like this: 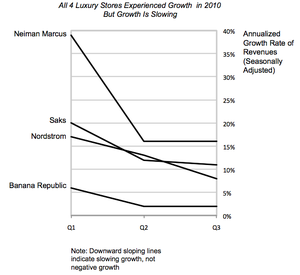 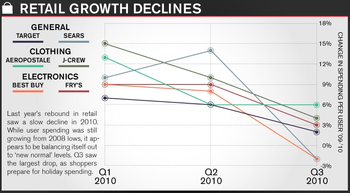 At the top of the poster sits a similarly-styled, slightly busier chart, comparing the change in growth rates of retail sales by type of retailer.

Placing the line labels beside each line eliminates the need for a legend, and also removes the need to use six colors on the same page.

The 3% increment on the sales axis is unusual, as if to defy convention for the sake of defiance. I'd stay glued to a 5% increment.

The text sings a different tune from that of the chart. The only year visible to the reader is 2010 while the text refers to 2009 and 2008. This forces readers to crawl around the plumbing (to use Andrew Gelman's term); to see the connection to 2009, readers have to know the formula for seasonal adjustment. There is no linkage to 2008 as far as I can tell. Better to hide the pipes.

And then we have the little issue of the negative growth rate. In a chart like this, the negative numbers should shake up readers because they represent not just declining growth but contraction. Shoving this into a little corner does not do it justice.

The same chart with minor changes: 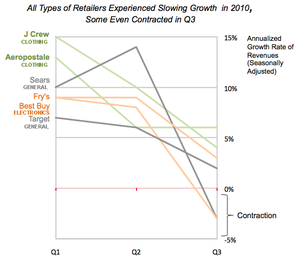 Thanks to reader Chris P. for sending in the link. Chris suggests that a longer time horizon be plotted.

In the next post (second mint), I will deal with the interpretation of these charts.

Isn't the phrase "annualized growth rate (seasonally-adjusted)" a little too complicated for a general audience? (You might not be writing for one, but Mint probably is)

I get the need for precise language, but I don't think too many Mint users are going to comprehend the word "annualized." Maybe shift it to the end of the label, so people who don't understand it don't just stop reading? Perhaps "Seasonally-adjusted growth rate (annualized)".

If a data point moving up from stage to stage doesn't bump a data point down, then it isn't a bumps chart, it's just a line chart.

You got it right recently when you wrote: "one of the secrets of the Bumps chart -- the reason why it feels far less cluttered than it has the right to be -- is that no two data points will overlap, that is, for any given week, only one team occupies any particular rank."

"The 3% increment on the sales axis is unusual, as if to defy convention for the sake of defiance. I'd stay glued to a 5% increment."

Isn't it rather because most of the data points are around 3%,6% and 9%? (for Retail Growth Declines)
Wouldn't staying glued to a 5% increment also mean you do it to agree with convention for the sake of convention?