Failure to adjust is a mind trick: second mint

In a prior post, I looked at Mint's illustration of the 2010 retail growth data. I suggested little changes that can enhance  their power of communication.

While writing that post, I noticed two larger issues with the text accompanying the first chart on their infographic poster. Here is that chart again: 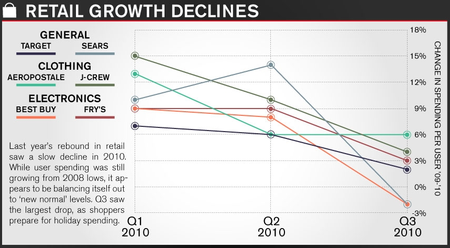 The designer declared "story time" when he stated "Q3 saw the largest drop, as shoppers prepare for holiday shopping". The neighboring chart seemingly provides evidence for this holiday-accented story but in fact, offers no support for it. How do we know the decline is fully or partially explained by holiday shopping?  Read more about "Story time" on the Numbers Rule Your World blog, here and here.

The chosen narrative, in fact, does not hold water. The chart designer forgot that the data has been seasonally adjusted. The data shows that growth has slowed from Q2 to Q3 after removing the effect of seasonality. Holiday shopping, and also any associated sales contraction in its anticipation, happens every year, and their (seasonal) effects have been taken out of this picture. Relative to Q3 2009, the sales of Q3 2010 were 3% lower. This drop is not explained by holiday shopping since that factor affects both 2009 and 2010 figures; however, if there is something peculiar to the 2010 holiday season that should cause Q3 sales to decline more than usual (say), then we have a story.

A more thorough analysis would require the data be adjusted for inflation and for population growth as well. The former is necessary because a dollar in 2010 is not the same as a dollar in 2009 (well, given the low interest rate and low inflation, this factor may be immaterial at the moment); the latter is needed because retail sales should rise because of population growth even if the consumption level of the average person does not change.

Not long ago, adjusting data was attacked as a dishonest "trick" (see here). On the contrary, failing to adjust data is the more serious crime. I show this in the relatively safe haven of retail sales statistics but ask any statistician, and you will get the same advice: adjust the data.