Stefan S., whose team created the inkblot charts featured here, has updated his page of charts with a bunch of new ones, including some bubble charts. I had fun looking at a few of his experiments, and learnt a bit from them. 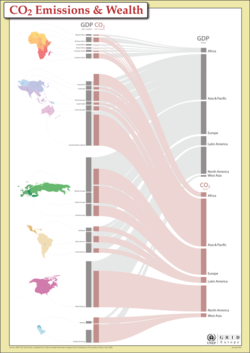 This chart deals with the geographical distribution of CO2 emissions and of wealth, and their correlation. The "standard" format would be to put pairs of columns onto a world map. That format has various weaknesses, and it is great to see Stefan try to reimagine the chart.

I especially love how he broke up the map into continents and subregions and arranged these pieces in a clean manner. He also recognized that stacked columns are not great for comparisons as the two pieces being compared don't usually sit at the same level. So in this chart, most pieces are level at their base. The solution is not perfect though, as for instance in the European section, it was very hard to put everything level without introducing white space.

Stefan also realized that you can't make it easy to compare distribution within a continent and across the globe in one chart, so he created the right-side column to solve this problem. Again, it's a good effort, not entirely successful but a very good start.

Another chart I like is the inkblot chart that deals with all levels of the data simultaneously. These, I think, manage to both engage our brains and entertain us.

***
Stefan specifically asked for feedback on this bubble chart: 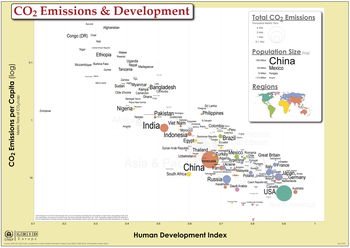 I must say the map legend is a lovely touch.

As a whole, the scatter plot is effective at showing the inverse positive [oops, see comment below] correlation between development and per-capita emissions.

The effort is enormously ambitious in terms of stuffing as many dimensions as possible onto the same chart. I feel like the data can benefit from being shown in a set of charts, rather than one.

I'm sure Stefan would appreciate other comments on this or other charts.

Why is the CO2 Emissions per Capita scaled from low on top to high at the bottom? My first impression was that as human development index increases, CO2 emissions per capita go down, and I know that's not true!

The reason for inverting the Y-axis was more a political-emotional one: We don't want people to look on the graph and say: We wonna be "up there" (upper right part, with a normal graph) like the others. By inverting the Y-axis, we give the development of increasing CO2 emissions a "negative" character. Now, the question would be: Do we wonna be "down there" (lower right part, with the inverted style) like the others? No, we wonna be in the upper right part! (Translating into high HDI and low CO2 per capita.)

The "normal" display is on our website too (with GDP instead of HDI). And, yes, physiologically, it makes a difference. Although, I fully agree with the difficulties which imply the use of an inverted scale.

As well, the use of a logarithmic scale is very treacherous. Although traditionally used, and much more easy to design, and more appealing, we've just added a version with linear scale. Makes quite an astonishing difference! Looks like this:

sorry but it is totally obvious to find a correlation between the measures reported in the bubble chart: the variable on the y-axis is a component of the index on the x-axis; it is however useful for testing to control if the variable correctly explain the potential the analyst guess exists towards the index.

@datamaps: I don't know if I understand you correctly. But as far as I can see it the variable on the y-axis is NOT a component of the index on the x-axis. The HDI is composed of three variables: GDP, school enrollment, and life expectancy. That there is a strong correlation between CO2 emissions and GDP is known, but not mandatory. Although it's a long way for "green economy" and "resource efficiency" to find its way into practice...

@stef: yeah, you're right, so sorry... I worked a lot on many different things those days and I've just mixed up a bit :( it's the Human 'Sustainable' Development Index that contains the emissions ratio

I'm independent conservative. I'm sorry, but it is so obvious that this "whole emergency climate change" Is garbage. There is so much disinformation. The Earth is NOT stagnent. Their will be cooling and warming stages. I think it more of a matter of thinking logically. Electric Cars should be implemented, but EXXON bought those rights. More accountability for big corporate environment polluters. This whole green thing is just as big as a scam as “organic food”. The lies we have to here from the “Katie Couric” crowd is just non-sense! When are we going to wake up?