The New York Times printed an amazing set of graphs about the election results last Sunday. The full version can be found here.

The best thing about this set of charts is recognizing that the aggregate data may obscure differences between subgroups, something I address in Chapter 3 of Numbers Rule Your World. In some cases, the charts go two layers deep, for instance Women 18-29 and Men 18-29.

The organization of the various components of the small multiples effectively splits the groups won by each party. In fact, it's very easy to read off the individual chart titles to describe which subgroups leaned to which party, and by how much.

There is so much in these charts that you can spend an entire afternoon exploring and examining the details.

I wish the charts were made simpler. It's very daunting to process the entire page. In terms of subgroups, what we really care about is the size of the drop-off from the previous election; on this chart, though, the right tail of every single chart seems about the same so one wonders if this were a wipe-out across the board by the Democrats, or did the design decisions obscure the differences between subgroups?

I'd suggest one or more of the following simplifications: 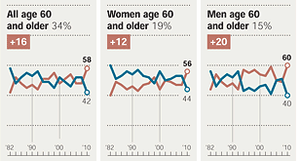 I'm not sure the second split by gender adds much to the story here.

What they have is an excellent chart; I think simplifying it a bit makes it even better.