Detached in time and space

A reader sent in this "pie chart" (better called a "donut chart") which summarizes the results of this survey. 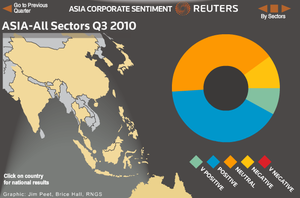 My dislike of donut charts has been well documented. Click here.

What I want to discuss is the use of interactivity, a feature of this chart but something that backfires. The underlying data is a 5-level rating of "corporate sentiment" by industry, by country, and over time. That would be 4 dimensions jostling for space on a surface. Obviously, some decisions have to be made as to which dimension to highlight and which to push to the background. 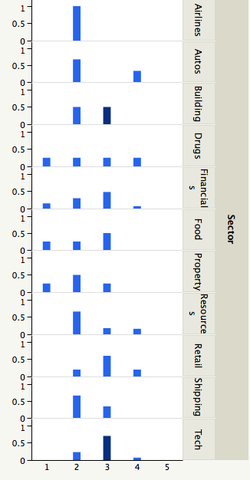 The version on the right shows, for instance, the distribution of ratings by industry for Q3 2010, and for all Asia combined. This is a rough sketch, and one would want to fix quite a few things: making the sector labels horizontal, reducing the distance between the columns, labeling the ratings 1 as "very positive", ordering the sectors from most positive to least positive, etc.

A chart of ratings by country (aggregate of all industry sectors) would follow the same format. Similarly, one can compare ratings across countries, for a given sector... and this can be replicated 11 times for each sector. Similarly, ratings across industries for any given country.

For comparisons across time, I'd suggest using average ratings rather than keeping track of five proportions. This reduces a lot of clutter that does not improve readers' comprehension of the trends. A line chart would be preferred.

A better way to organize the chart is to start with the types of questions that the reader is likely to want to answer. Clicking on each question (say, compare ratings across industries within a country) would reveal one of the above collections of charts.

Another improvement is to add annotations. For instance, one wonders whether the airlines colluded to all give a 2 rating. It is always a great idea to direct readers' attention to the most salient parts of a chart, especially if it contains a lot of data.