The Trifecta checkup requires us to align all three aspects to make a great chart. It is sometimes the case that a wise choice has been made regarding the type of chart, but the other elements are missing. Reader Parker S. sent in an example of such a chart.

This chart created by ESPN illustrates the evolution of the "power ranking" of the San Diego Chargers football team within each 18-week-long season and across multiple years. 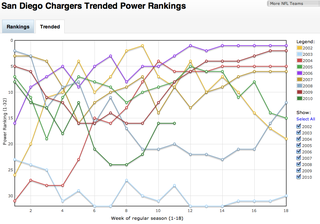 The bumps chart is invented for this type of ranking over time data. And in fact, we are looking at a bumps chart.

But with lots of distractions: the multiple colors (instead of year labels), the dots, the legends, the year selector, no foreground (current season).

***
Parker couldn't figure out the practical question this chart is supposed to answer (the top corner of the Trifecta).

In fact, one of the secrets of the Bumps chart -- the reason why it feels far less cluttered than it has the right to be -- is that no two data points will overlap, that is, for any given week, only one team occupies any particular rank. This simple rule is violated when the same team's rank across multiple seasons is plotted, and thus the chart feels very busy.

It proves impossible to find a source of ESPN power rankings that has all teams for a given season. However, I found something similar at CBS Sportsline, a competitor. Here is their version of the ranking chart:

They got the practical question right but severely under-utilized the form. We can see how the Chargers season is going but have no ability to compare them to other teams.

We can start with the question of visualizing how Chargers and their AFC West compatriots are doing relative to the rest of the league: 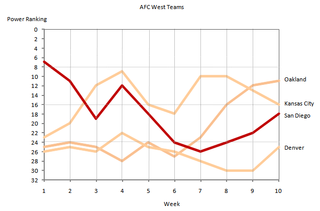 The AFC West is a mediocre division this season, with all four teams in the middle of the pack, none in the top quarter of the table. The Chargers started high, plunged and are recovering while the Oakland Raiders have improved over the course of the season.

The Bumps chart is more powerful when the full set of data is plotted, and when the lines are highlighted with reference to the question being answered. Are AFC teams or NFC teams doing better? 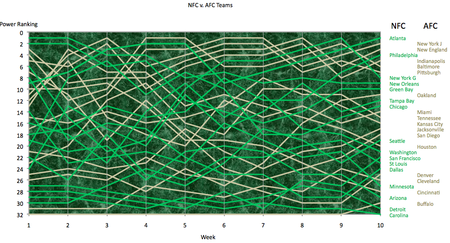 The next one highlights the teams that earned the largest change in ranking from week 1 to week 10. The background (gray lines) consists of those teams whose rankings in Week 10 were within 5 places of their initial rankings. 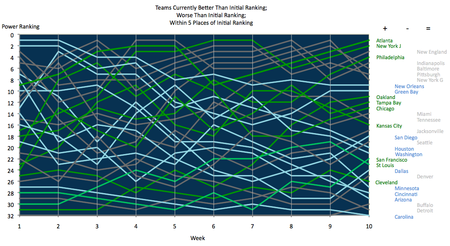 The practical question might be whether Week 1 rankings are a good predictor of Week 10 rankings. The following chart shows that most teams in the top quartile remain there (except San Diego which is coming back, and Dallas which could be coming back too), the bottom-quartile teams also tend to remain there, while not surprisingly, the middle teams don't tend to stay in the middle. The color scheme should be reversed if one wants to highlight the dispersion of the rankings of these middle teams by Week 10. 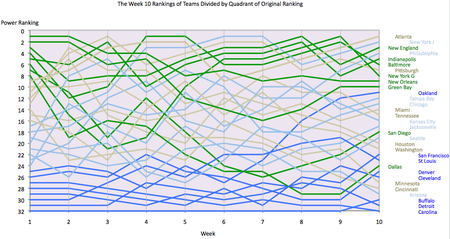 Thanks for taking this on, Kaiser. You at least made it easier to analyze. It's still a lot of teams. I think one more revision to this might be to split this out into the three groups you mentioned - top quartile, bottom quartile and middle. I'd do it based on the ending or current date though.

The storylines become:
- Top 25% This is how the top teams got here (they've always been good, they were darkhorses [Tampa Bay] or they are rags to riches [Oakland])
- Bottom 25% Here's the bottom of the barrel (too bad for Detroit and Buffalo, Carolina is getting even more awful, and Dallas has fallen on hard times . . . so far)
- Mid 50% Steady-Eddies (these teams just don't have what it takes to make the next step up but they aren't dreadful either)

Anyway - great work. It's a little messy, but you did a great job with it.