This is part 2 of a two-part piece on a set of charts published in Scientific American, describing the results of a poll asking their readers about their trust of various types of experts. In part 1, I looked in detail at one of the charts: this chart has many problems-- problems with the execution of the bar chart, problems with the choice of comparisons, problems with the design of poll questions. 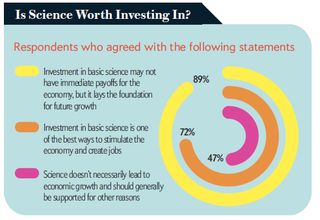 Long time ago, I wrote about racetrack graphs. An example shows up here. Note the length of the yellow track relative to the length of the pink track. It should be about 2:1 but this type of chart makes a many-fold illusion. 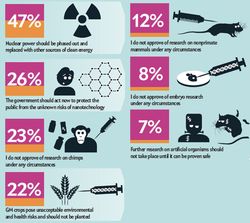 For this chart illustrating fears of technology, the designer chose to emphasize the data (percentages), with a subtle embedding of a column chart in which the columns were over-stretched to form squares.

The data jump at us, rendering the graphical element--the embedded column chart--secondary, even redundant.

But columns are very useful things. They are self-sufficient. We can judge the lengths of columns (or bars) very easily, so we do not need to print data next to columns.

However, thin columns work better than thick columns, so stretching columns to squares is not a good idea, even if the relative areas are not distorted.

Also, even the choice of colors here can be quibbled with. For me, the dark pink draws more attention than the medium orange, which means that my eyes and my brain (reading the printed data) start having an argument. 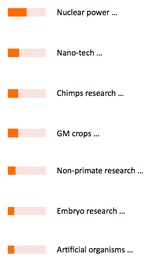 So, here is a sketch of what a bar chart would look like. See, you don't need to print the data on a bar chart--it's not hard at all to see that about 50% fear nuclear power.  I have lightened the pink.  Just add in the pictures, and the captions on the right side of the chart, and you have an improved chart.

Now, start the stopwatch, and measure how much time it takes to figure out what this chart is telling you: 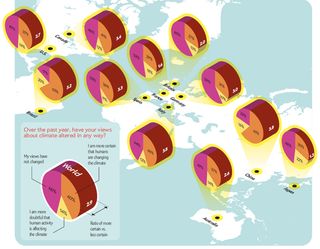 This is truly a head-turning chart if you know what I mean...

In the article, this chart has the title "Climate Denial on the Decline". Maybe, maybe not--but oh dear, how are we to tell?

Instead of fixing the chart, it is perhaps more important to fix the poll question. It's not a good idea to describe a trend when one has data from this year and last year only. If they are isolating the effect of some major event (say, a Kyoto protocol) that happened during that year, it would be fine but that's not what is attempted here.

The racetrack chart needs a crossover, like in speed skating.

If you redefine the "race track" chart as a "clock/dial chart" then your misgivings are taken care of. Think of the circular loading counters on Flash pages.

And yes thinner bars are more easy to read, as a stand alone. But as a standalone they are also less attractive to readers. In this case I think its a, intriguing and subtle use that compliments the text data. Though I agree flipping the colors would have been a better idea.

Philip: thanks for the comments. Concerning the race track chart, I find it useful to do this experiment: imagine the data is not on the page; imagine all you have are the yellow, pink and blue arcs; now ask yourself what are the relative proportions of respondents that say one thing vs. the other thing. I think you'll get my point that this chart is entirely reliant on having the data printed beside it -- which is to say it fails my self-sufficiency test: you don't need any of the graphical/artistic stuff when they do nothing to help us understand the data.

Regarding the "technology fears" chart, I don't see how printing large-font numbers can ever be "attractive" to readers so we have a difference in taste.

I still disagree with you about the racetrack chart.

AS for Tech Fears I think it's attractive because it's an info graphic. It's an entry point into the story for people skimming articles. A simple bar chart might be more technically informative but it's also dull as dirt.

Also, I'd move the dotted line from above the permalink/comments line to below it. Having it above makes it appear as if it belongs to the next article.