The nothing that is

When Mike K. sent this in, he had a few comments, including "This is, of course, from the Chronicle of Higher Education", and "talking about a math course", which mean "very naively", we would "impose a higher standard." Should scientists be held to a higher standard? Lead by example, perhaps? I had the same feeling when I wrote the post on "Unscientific American" about the charts that'd flunk Ed Tufte's intro class, published in Scientific American. 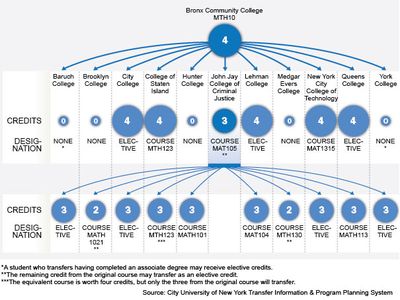 In one word: confusion. Mike couldn't understand the relationship between the first row of bubbles and the second row of bubbles. It is as if the one course taken at Bronx Community College results in credits recognized everywhere! (You basically have to read all the footnotes to get some clues.)

Also note the usual confusion about areas and diameters.

In addition, the zero-bubbles prove themselves to be the nothing that is. They expose the folly of using bubbles when the data series contain zeroes (not to mention negative numbers). We can visualize this problem: 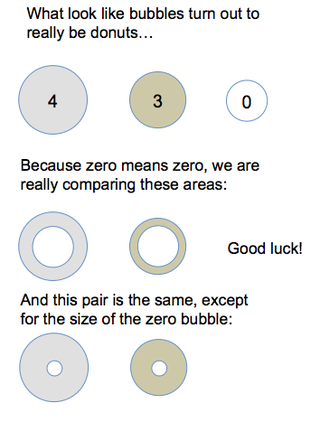 For those mathematically inclined, we actually have an impossible situation: the size 4 bubble really contains the zero bubble plus a size 4 bubble; that is, 0 + 4 = 4 but if 0 has positive area, then the area of the 4 on the left hand side of the equation must be smaller than the area of the 4 on the right side. So, basically, don't use bubble charts if your data has zeroes.

Well, I believe the math does compute, for sufficiently large values of 0.

indregard: Good point. In other words, if we make the size of the zero bubble large enough so that it overwhelms the data, then all bubbles will be the same size (equal to the zero bubble) and thus the equation still holds.

Readers who find the above comment abstruse, yes it is the kind of thing mathematicians focus on. And yes, this stuff has little practical value since it focuses on "boundary" cases that don't happen much if ever.