Showing dynamics on a business chart

Dave S. achieved a rare feat, which is to send in a great-looking set of charts. This post at Asymco is worth reading in its entirety; the author Horace discusses the process by which he worked through several charts, arriving at the one he's most happy with.

The secret to the success here is the careful framing of the question, and the collection of the appropriate data to address that question. The question is the competition between wireless phone vendors in the last three years. It was established that the right way to view this competition is in two dimensions: share of revenues, and share of profits. Note the word "share". Share of profits is not a metric that is often discussed but it is the right metric to compare to the share of revenues -- getting both numbers onto the same comparable scale is what makes this work.

Needless to say, the raw data one would collect come from the financial statements of the eight individual vendors. Plotting these numbers directly would be a mistake. So you take the numbers, making sure that you're really counting wireless revenues and wireless profits, and then compute the shares. (I am not actually sure that they have wireless profit data because large companies like Apple and Nokia typically don't break out their profit shares, even if they provide the revenue shares by line of business.) 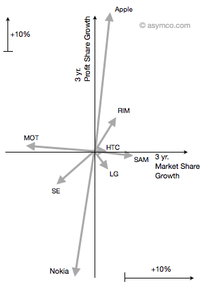 This is the final graph Horace landed on. It puts all the vendors at the origin in 2007 and then tells us where they landed in 2010 in terms of revenue and profit share growth/decline.

It would be even better if he makes the scales work harder: e.g. have equal lengths for the 10% change along both the vertical and horizontal axes. Alternatively, you can scale it such as each unit on either axis represent equal dollars.

This is a very focused chart that answers the question about the relative change in positioning of each vendor. What it doesn't answer is the starting position or ending position of each. Note, while Nokia is depicted as losing share on both revenues and profits, Nokia still has twice the revenue share of the other vendors, and out-earns everyone except Apple!

I am not saying this is a bad chart. It is designed to answer the relative question, not the absolute question. That's all.

There is one way to have the cake and eat it too.  Horace almost created that chart. He showed two scatter plots, one for 2007 and one for 2010.

If he just overlays one on the other, and use lines to connect the dots for each phone vendor, he will have a chart that shows absolute and relative values all at once. Here's a crude illustration of this: (missing the labels to show that the arrow end of the line represents 2010 positions) 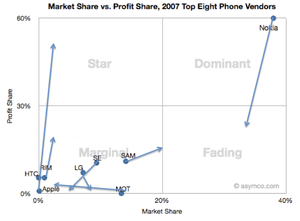 I like this kind of chart a lot. It is great for showing dynamics in a set of variables, without actually making the chart dynamic.

(Even on this chart, it is better to harmonize the two scales.)

There are two issues on the better graph you realized and that could improve the whole thing.

1. Showing that it is from 2007 to 2010. The labeling gives only 2007 and creates confusion when seen alone without the context of the text.

2. Adding the word "World". The market share and profit share are intended to be worldwide. It is important, because many many articles are often given number when it is only USA market shares, and people copy them thinking it is worldwide.

Thanks for the analysis. My first attempt was using the second chart you show, but I did not like it because of the clutter and noisy look. I agree about the harmonizing of the scale. I should have done it and was thinking of it after it was published. Someone at gizmodo took it and added color to the vectors. It was an improvement as you could see each vendor as a different color.

(by the way, the numbers were all for cellular phones)