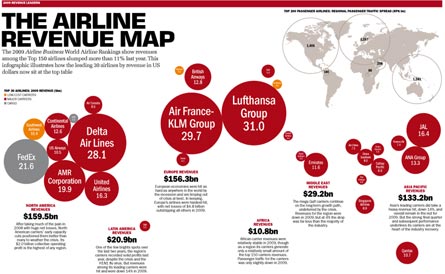 Reader Joel D. submitted this chart showing airline revenues of major airlines around the world, another chart that puts bubbles on top of a map.

Cool, but really quite naughty. Take the different size bubbles of British Airways (12.8) and Air France-KLM (29.7). Grossly disproportionate. I appreciate the designer's attempts to introduce a geographic element to this but the immediate take-outs here from the bubbles are misleading.

Sometimes a bar chart is all life needs.

I think it fails all three facets of the Trifecta checkup: it does not have a well-defined practical question; the data is not processed properly; and the chart type does not work with this data.

Just a quick note, the Trifecta link is broken. Love the blog!

Misleading in many ways.

Revenue in the airline industry has little to do with profit.

Some with big revenues have huge losses.