Has the New York Times lost the plot? This was the thought in my head when I saw this scary thing last Friday, right in the center of the front page of the New York edition: 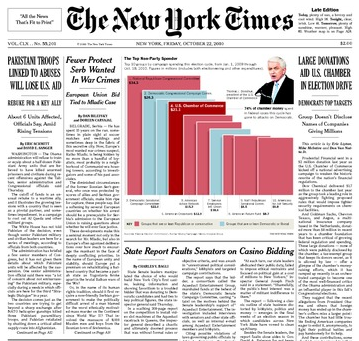 This Halloween scare is supposed to tell us who the biggest political donors are, and to what party. Here is a close-up view: 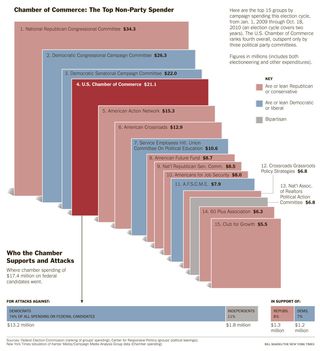 Well, this one looks slightly different from the one shown above but this is the one that they are currently carrying on the website.

I think the stacked squares, arranged in this particular way--staggered both horizontally and vertically--is supposed to represent something. I can't figure it out. Maybe a loudspeaker? An accordian?

This chart fails our self-sufficiency test. The only way one can appreciate the scale of the donations is to extract the data from the chart, in which case, this is the same as a data table.

The use of the unexplained red color for the Chamber of Commerce (the subject of the accompanying article) is also problematic. Based on the inset, it's pretty clear that the Chamber is "leaning Republican" so it should just be colored pink.

What is very hard to understand is why the amount of overlapping from one square to the next square is not the same.

We can visualize the problem as follows:

According to the data, the US Chamber of Commerce donated about the same amount as the Democratic Senatorial Campaign Committee ($21.1 v. $22). However, the visible areas on the chart are vastly different. There is a presumption that readers will look behind the squares to see the full square but that's pretty hard to do when they are stacked 15-deep!

What's the amount of distortion due to this design?

A lot. Much of this is due to the fact that the lowest ranked item plotted is an actual square which happens to have the largest unobstructed area.

Here's a dot plot that conveys the essential information with minimal fuss: 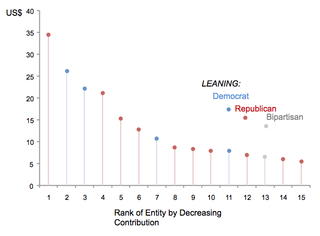 Of course, a bar chart works fine too.

I think an important question here involves emphasizing the higher total amount of dollars for Republican-leaning vs. Democrat-leaning. (Of course, since the plot only covers the top 15, this conclusion may be biased.) At any rate, I might group the dots for the Democrat-leaning on one side of the x-axis and the dots for the Republican-leaning on the other side and then add a colored dashed line for average contribution of each group.

I find imagining the complete squares very easy, actually - but then run into the problem of perspective; my eyes are sure the box at the back must be huge, considering its distance away from me...

Don't the "squares" sit in holes? At least that's how I understand those bases they're on. So it becomes a simple column chart where the baseline isn't at zero.

And maybe their widths are scaled by the same ratio as their heights? Can't really tell. My brain wants to assume that I'm looking at a row of columns from an angle and that their right sides (as I look at them) really line up, but look staggered from the perspective.

And the colors remind me of Excel's default pastel palette.

All in all, yuck.