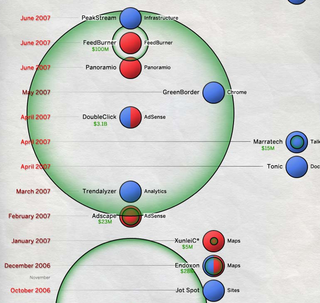 Daniel L. submitted this infographics with some positive comments:

-There's quite a bit of information.  The objects on the chart have some depth beyond dots on a page.
-I'm kind of willing to overlook the size of the infographic because I think there's pretty good use of the page.  Yeah....I know...a lot of blank space in there, but I think that's the price of doing the 3 column schtick - and I think it works in this case.

I am less impressed with this chart. (The full version is here. It's big.) There are many problems:

It has all the signs of having tried too hard. There is indeed a trove of information. We are presented with each of Google's acquisitions, the time of each deal, the value of each deal, whether the deal happened in a busy or not busy period, the type of deal by synergy with Google, type of business the acquired company is in, the impact on the financials of Google. As if this is not enough, the chart includes the months without any acquisitions in small gray letters.

But the designer seems to have no idea what the plot is. I can't figure out what I am supposed to read from this poster. While I often dislike the graphical details on this genre of posters, I usually can enjoy the attempt to tell a story using the data but on this one, I just don't know what to make of it.

Also notice that the foremost dimension on this chart is the chronology. To me, it is the least important dimension. If one wants to understand what Google's acquisition strategy is, for example, the chronology is not important - it would have been much more informative to group the acquisitions by type of business, or impact on financials, or any number of other dimensions.

However important the chronology is, it's one of the features which was addressed ineffectively in this graphic. Months are treated as categories, repeated when multiple events occurred within a month, and practically skipped when a month was silent.

I lost interest in it after 20 seconds.

As the designer of this infographic, I have to agree with all the criticism. I was really just stuffing too much info in the trunk and hoping the reader would stumble across an insight.

I will admit that data-driven infographics are not my strong suit.

I suppose this chart would server better as a quick reference than have any sort of narrative.

Jess: Thanks for the comment. You already did all the hard work to pull together the data. All it takes is some storyboard planning. For example, you can divide the acquisitions into types of businesses being acquired; now within each section, you can have the chronology and the size of the businesses, and so on. Or you can divide the companies by size first, and then within each size bucket, investigate the types of businesses, and so on.