Buy one get one free costs you one way or another 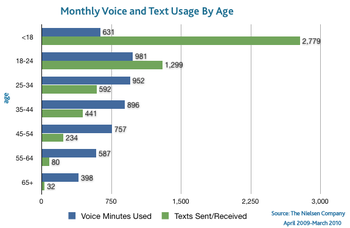 This chart by Nielsen's mobile unit explaining the variability of cell phone usage by age group in the U.S. looks innocently standard. It's a grouped bar chart.

I have long argued that this type of chart should be used sparingly. Notice that the key point of the chart requires comparing voice (or text) usage across age groups; this means readers are asked to compare the relative lengths of the blue (or green) bars. With grouped bars, readers are asked to literally jump over bars to perform the comparisons. The more groups, the more bars to jump. I don't like to exercise my readers in this way.

Something else more damaging is lurking beneath. We can see this by splitting up the charts. Here, I'm reproducing the two charts as is, but on a small multiples format. 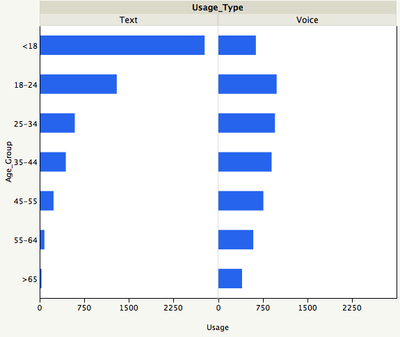 Recall the key practical question here is to compare usage across age groups. Now look at the massive amounts of empty space on the Voice usage chart: the space crowds out the data, meaning that the lengths of the voice bars are compressed, affecting our perception of differences.

What is causing this problem? It's the use of one axis for disparate data. Voice is measured in minutes and texts in units, and in trying to avoid double axes, the designer manages to make things worse by lumping them together.

In the Trifecta checkup, they outlined an interesting question, and collected the right data to address it but the execution of the graphic was wanting.

It's a case of buy one get one free, except that when you go home, you realize you would never buy that second item on its own.

PS. I have more to say about the statistical thinking behind this Nielsen press release at the sister blog.

I actually kind of noticed this on my own with some monstrosity I created at work about a year ago. It had 3 groups, 2 bars a pop. When I had put this together, it worked. the values were all relatively close, the axis was the same, so I felt like it made sense.

Now, I looked at it's most recent run, and the numbers are pretty far off. One f the 2 bars has drastically overtaken the other and now the lesser of the bars just become noise.

-the labels don't help matters I find that my eyes are trying to follow them more so the than the bars. I can't decide if this is an issue where my brain gets lazy of trying to look at the bars and just gives up and looks at the labels or if it's stylistic and it's just that the labels aren't muted.

The links(?) variability, comparing and small multiples all reference the very webpage onto which they reside. So what's the (hidden) purpose of this?

The two things being measured have totally different units (texts/month and minutes/month), so there is no need for them to have similar scales, because there is no comparision between the two.

As you indicate on your sister site, an alternative visualization is to plot the two groups of bars back-to-back. Although it makes it harder to directly compare Voice and Text usage by age groups, it makes it easier to see the distribution of each group. I posted a visualization of these data at my blog:
http://blogs.sas.com/iml/index.php?/archives/18-Comparing-Cell-Phone-Use-By-Age.html