This Economist chart on the history of world GDP throws the art of graphics back several hundred years. (Thanks Tyler A. for the link.)

And I can't really re-make it since I can't make heads or tails of it.

PS. [8/18/10] Dustin linked to a line-chart version of this chart, from the World Bank site, via Chartporn. 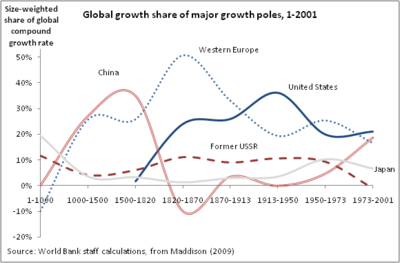 I think the evidence is right here as to why the Economist execution leaves a ton to be desired. The use of lines allows the reader to easily trace the rise and fall of different economies, which is the point of the data set. The stacked-column chart draws attention to a point-in-time distribution of GDP among different countries, which is of secondary importance.

There are other differences: this plots the share of "growth" as opposed to the share of total GDP. It also plots regions rather than countries (well, except for China and Japan). It does not presuppose that the US was in existence before its founding. It could have (should have) included an "rest of the world" line.

The spacing of the years is still problematic but it's an Excel inconvenience, really. But it's ok to stretch the axis on a line chart, it's a problem to do it with a column chart, as demonstrated above. The gaps between columns should be proportional to the years between the data but this is impossible to do in a column chart.

I assume that the gap between the tops of the bars and 100% represents the "other" category. I also assume that they were using historical correlates such as the Italia province of the Roman Empire for Italy or Gallia for France (in the case of AD1). Obviously it would be nice to know how they decided to project the economic activity of the hunter-gatherers populating the stretch of land that is now the United States.

Overall, I agree that the execution of this chart was poor, but I don't think that a column chart is the worst choice here. They are taking somewhat arbitrary slices of time and a line chart would (at least to me) carry with it a greater implication of continuity between the times they chose (especially AD1, 1000, and 1500). In the end, they leave far too much uncertainty and force the readers to fill in blanks that they should have filled themselves.

I think the differing gaps between columns are meant to indicate the differing time gaps. Although it's still pretty ad-hoc -- I guess they couldn't come up with a spacing that would make the differences in recent years visible, whilst still allowing them to start with 1ad.

why does it matter how the countries are sorted within a column as long as they are the same sort for each column?

Oh come on. I actually really like this one! Many of the issues you raised have been addressed by others. Regarding the ordering within a column, it looks quasi-geographical to me. Asia at the bottom, then the US, then European powers. I think your only actually valid point is that the legend should be vertical and should align with the country data.

This chart is artistic. it requires processing and thought, as a painting or sculpture would.

We are taught that professional and academic charts should be clearly described such that there is no equivocal information.

This chart does not belong in a boardroom or classroom, but its puzzle features leave you longing for answers. Have questions? Go hunting!

I'd say that the different gaps is a good decision, since they represent (although not accurately, due to the huge difference between the gaps) how many time passed between one bar and another.

And I'm not a fan at all of stacked bars, though I've been using them only when I want to show only the most contrasting values, USA and China in this case. All other data are hardly comparable. It can be an editorial decision, even in detriment of other data, which may be a pity.

Rather than a complete redesign, I think this chart need some retouching. Maybe I'll try later.

The horizontal axis in the line graph is even more problematic since with this category-style axis (as Excel calls it) the first-order derivatives of the growth rate (i.e. the change in growth rate) have no meaning any more. Smoothing only makes thinks worse, in my opinion.

"The gaps between columns should be proportional to the years between the data but this is impossible to do in a column chart." Not impossible, but not worth doing. You COULD put 998 blank columns between year 1 and year 1000, another 499 between year 1000 and year 1500, etc. You end up with columns too thin to detect the color of the stacked components, so what's the point? The line chart is much better, you're right.