Light entertainment: a world of spikes

Something light to start the week... this infographics poster submitted by Curtis R. has to be seen to be believed. Prepared by the Rate Rush website, it compares Digg and Reddit, two services that rank and track the popularity of web pages. They were in the news a few years back; do people still use Digg or Reddit?

Here is a section of the chart: 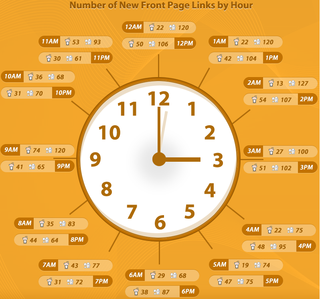 Oh, and if you scroll down further, the designers received some appropriate feedback and re-did this chart:

I have to commend them for responding to reader suggestions. This line chart is obviously much better, and we can see that Digg has more front-page stories than Reddit at any time of the day. (Please put the data-series labels next to the lines on the right. And fix the nonsensible decimals on the gridlines.)

Here's one more for further amusement: 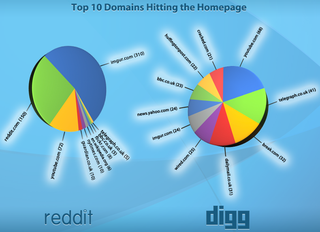 Curtis reacts to this spiky chart:

2 pie charts, tilted at different angles (making it impossible to accurately judge the size of each sector), with a color legend that switched from chart to chart (e.g. imgur is blue in the reddit chart, gray in the digg chart).

I think the scale on the line chart is misleading. The original post says they're counting "hits" to digg but "100 points" on reddit, so the units don't seem comparable.

Alex: Good questions. I didn't realize they were using different units. They should have just converted to "standardized units" but then one wouldn't be able to say which one is more popular.

As for time zones, they should be processing the data in "local time" so, say, you line up 3 pm no matter where one is located.

Please do correct me if i'm off:

The usage of pie charts here is questionable, especially considering that an "other" category (for domains other than the top 10) is omitted. We're not given 100% of the domains submitted, and the charts make it look like ONLY these 10 domains are submitted.

It's also impractical to not specify a timezone on the clock thing or subsequent line chart. We're left to guess (pacific time?), and i would have liked to contrast it to my usual Digg habits, being in GMT+1.

"Do people still use Digg or Reddit?" - Very much so. Have they been succeeded by other services?