As you may have noticed, posting has been sluggish lately, and this means I have a backlog of submissions. So please be patient if you sent something to me. 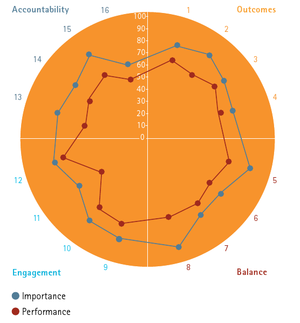 Alex C., at NUS, wasn't so patient so he wrote up his own post on this gaping chart from Accenture reporting on a survey of people's attitudes towards health care. In particular, Alex does a great job taking down the questions in the survey: for appetizers, he noted "So, the interviewees were asked 'Do you think it’s important to focus on delivering real improvements in the overall health of the nation?' I wonder who answered no?"

(Amusing aside: I fibbed. Alex wasn't impatient. He just couldn't believe how rude I was. After spending some unsavory time manually eyeballing the data from these charts, I accidentally emailed the spreadsheet to Alex, thinking that I was emailing myself. So Alex received a reply from me, with the spreadsheet attached but with no comments, and he figured I couldn't be bothered. Perhaps I "gave minimalist, Ripleyesque replies", he wondered.)

Well, I digress. There are a few other problems with this "radar" chart that Alex was too kind to overlook:

Even more fundamentally, what data are being plotted? Turns out this is convoluted: I just don't share the enthusiasm about this metric. Not merely because we are bound to think an issue is more important if the government has done a poor job at it.

Just to surface another problem: from these charts, it's clear that people in different countries approach 5-point scales differently. Perhaps in some countries (see right), they just fill out a "straight-ticket" vote for all issues?!

Thanks Alex for bringing this to our attention.

The PDF of the Accenture report is here.

Never mind the radar charts that look like a drunk spider has wandered over your data, this report has pie charts with ordered values.

Page 11 shows a pie chart of "[...] how much trust do you have in the government [...]", and the pie shows the percentage in each of categories: none, a little, some, a great deal, and don't know, which are clearly ordered but presented in a circle. I've just had to page back and forth lots of times to work out that the Singaporeans trust their government the most, and Italians the least (as if I couldn't have guessed that myself).

Anyway, the data for the pie charts for all the countries could easily be represented in one graphic taking up just as much space. If these people can't get pie charts right, what hope have they to control crawling spiders?

Presumably the allusion is to Brian Ripley of Oxford University, a leader in the R community.

Brian has helped many more people on R mailing lists with precise and correct information than most of the people who take exception to his terse style and/or to his attitude that it is reasonable to expect R users to try to help themselves a bit, say by trying to read the documentation.

More could be said, but it is predictable that others will say it!

Brian's replies are always spot on, but in these days, my first port-of-call for R problems is Google rather than documentation. This means often the first thing is an R-help discussion featuring Brian's replies. In this context, they're not always helpful, but they weren't designed to be.

I should clarify: when I wrote "Ripleyesque", it was meant as a reference to the folk-lore image of Brian Ripley and his terse R-help replies, not to my actual opinion of the man. Actually I find his replies very helpful when, like James, I'm googling around trying to find out how to do something in R and find he's already sorted out someone with a similar problem. Of course, he's not obligated to give that help, so the reputation is quite unfair.

Kaiser's much worse: you send him a prime example of junk chart and he replies with an email containing nothing but the data, without even writing "Do it yourself"! :o)

Oh, and further to James' comment, if you're using google for R searches, you might try Dan Goldstein's webpage: http://www.dangoldstein.com/search_r.html
I don't know how it works but it does a great job of filtering out pages to do with the letter "r" etc.

Ripleyesque is basically an inside joke. Those who have used R-help before would get it. I am also a fan of Brian's responses. The "hint" of controversy is because Brian is not beneath sending a reply telling the poster to search the archives before posting something that has already been asked, which I find totally appropriate.