Pain, but no gain

Each section has its various problems; I'll take a close look at the middle part titled "No Pain, No Gain". 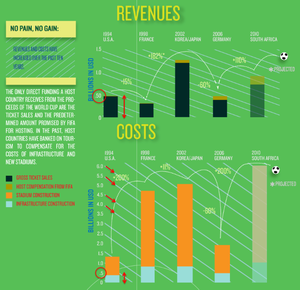 Let's start with the conclusion: Revenues and costs have increased over the past ten years.

When looking at the change in currency amounts over time, we must be take into account inflation. Currencies should be expressed in "real terms", or else any "growth" can merely arise from inflation. The US$0.5 billion earned in 1994 is worth about $0.7 billion in 2009 dollars.

For revenues that were earned in foreign currency, we must also be careful with the choice of exchange rates used to convert to US dollars. The designer should definitely explain how this was done in a footnote.

Back to the conclusion: if growth in revenues and costs is the key message, this chart showing drastic ups and downs fails to convey it.

The chart itself is all pain, no gain.

Here is an alternative: 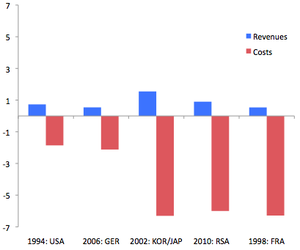 I like to run against convention once in a while; here, I order the host nations from most profitable to least profitable, dropping the standard chronology.

I did this because I don't think the chronology matters. Each World Cup is unique, held in a different country (even continent), with different organizations, under different business cycles.

What we see on this chart is that all World Cups are unprofitable, some vastly loss-making; and the current one is projected to be one of the least profitable of the past two decades.

Wow, nice optical illusion there: my brain is rather strongly convinced that the x-axis is trending upwards.

Same here. Had to do a double take to make sure.