Oil spills bring out the worst

Infographics types are having a field day telling us how "big" the big BP oil spill truly is. Unfortunately, whenever size is concerned, the specter of pie charts beckons.

Via reader Fia, we are alerted to the discussion at Discover's Cosmic Variance blog about the following chart (the entire poster hosted here at Iglucruise): 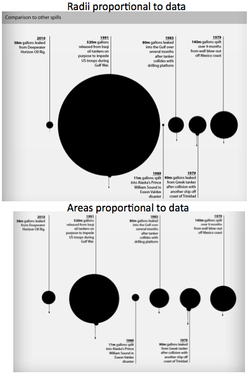 Sean's original post focuses on the fundamental issue in making pie charts of making the square of the radius proportional to the data, rather than the radius. The current version (shown left below) at Iglucruise has been corrected and the sizes of the pies are much closer together.

A more pressing issue with pie charts is that we do poorly in assessing relative sizes of circular areas. Try figuring out how much smaller is the BP spill relative to the largest circle in the chart...

Applying the Trifecta Checkup, we find problems with the choice of chart type, and also the choice of the practical question. The question of comparing this spill to past spills is premature given that the oil is still gushing. In addition, the nature of the 1991 spill (Iraq's deliberate dumping) is in a different class from accidental spillage.

Reader Curtis R. pointed us to another infographics about the spill, this one made by Fast Company, a business magazine. Their concept is reminiscent of the racetrack graph. 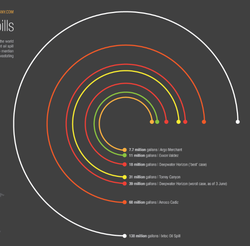 In other racetrack graphs, the tracks are close together, and terminate at different angles to the center; the data is encoded in the angles.

In this chart, the angle is everywhere 270 degrees, but the distance between the tracks are varied, and the data is encoded in the circumferences.

Alternatively, this can be thought of as a set of concentric circles with a right angle cut off. Since the circumference is proportional to the radius, the data can be found either in the radii or in the track lengths.

In other words, this chart is not self-sufficient. If the data is not printed directly onto the chart, it is impossible for readers to interpret it.

I would like to see a chart that looks like the following, which emphasizes the open-ended, progressive nature of the spill, using past spills as benchmarks:

One can stare at the orange and green arcs for however long, but can one tell the orange is shorter than the green by 3.3 million?