Head-shaking at the deep hole

Continuing to work through the pile of submissions, here is Jeannie C. recommending one of my favorite economics charts. The economics blogs are generating lots of charts, many of which uninspiring and run-of-the-mill but this one about the jobs picture, relative to past recessions, truly paints a harrowing story. (Looks like TPM took the chart from Business Insider but this chart has appeared everywhere). 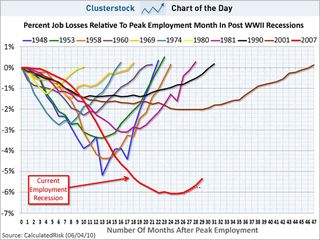 The little dotted extension at the end of the current curve (red) indicates the jobs picture after removing Census jobs. I have already explained why this adjustment is necessary (here, and here).

Two small improvements I'd make to the chart:

More than one shade of grey might better so you can trace out previous years more easily.

The most interesting thing I took away from this chart is that thhe curves previous recessions are pretty symmetric, with the minimum being within a month or two of the centre. (On closer look: recovery is the slightly quicker part). This would imply the rcession will be shorter than that after 2001.