A number of blogs have hailed this NYT diagram/chart/infographic as "nice". The accompanying article is here. 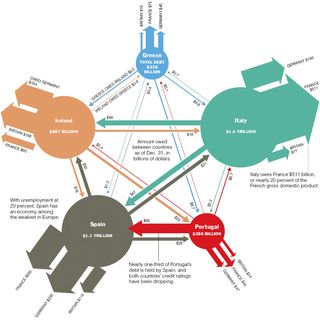 Whether this is nice or not depends on what message you want to convey with this graphic. If it is entanglement, then yes, the graphic reveals the complexity very well. If one wants to understand the debt situation in Europe, then no, this chart doesn't make it clear at all.

From the perspective of someone wanting to dissect the debt web, an enhanced data table is hard to beat. 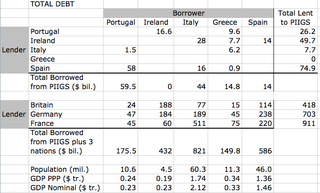 The first section looks at the interdependency between the five troubled countries, collectively known as PIIGS on Wall Street. The additional debt owed to Britain, Germany and France are shown below. Notice that the original chart does not treat these three countries the same way as PIIGS: we do not know what the values are of the arrows pointing from these three into PIIGS. 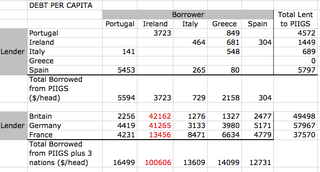 Expressed on per-capita terms, Ireland stands out as the worst of the bunch while the citizens of the other four countries are bearing roughly equal amounts of debt per person.

I tried to come up with something more "fun", as below: 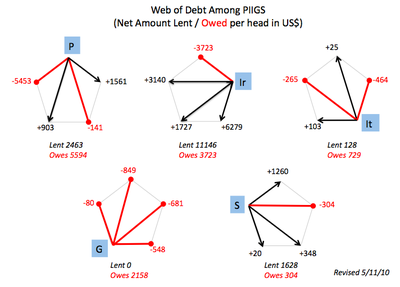 Here, I opted to use a small multiples chart to split the countries. In so doing, I accepted redundancy in search of clarity. Each amount is plotted twice once as a borrowing (red line) and once as a lending (black arrow).

It is immediately clear why Greece is the most urgent issue.

Perhaps the chart type is not as important as the transformations I did to the data:

2) All amounts are expressed per capita. Since the populations of these countries vary from 4.5 million (Ireland) to 60 million (Italy), the total debt cannot and should not be compared to each other.

3) Not shown here but I also expressed the net amount lent/borrowed per dollar of GDP. This is another metric that makes sense. The nominal GDP of these countries range from $0.2 - $2 trillion. The PPP GDP has a similar range.

4) One item I did not fix is the currency. Given the fluctuation in exchange rate between the Euro and US$, I think it may be better to express all the numbers in Euros.

A next step would be to include Britain, Germany and France.

PS. Reader JF pointed out an inconsistency in the numbers on the chart. I revised the chart to fix this issue. In the current chart, one can read the information as: the average Portuguese owes Spain $5,453, owes Italy $141, while having lent $903 to Greece and $1,561 to Ireland. Each chart can be interpreted from the perspective of the average citizen in that particular country. (For details, see the comments below.)

With teh original chart, I am torn between the idea of having two-way arrows (borrow/lend) and one-way arrows (net).
My main objection is that it is hard to relate teh size of the discs to teh size of the arrows.. at first glance, it looks like 80-90% of Italy's debt is owed to France, when really it's a bit more than half.

The other way would eb to scale things by % of GDP... the original chart fails to bring home the fact that Italy and Greece's debt as a % of GDP is similar (which I only know form elsewhere). However, it does show France has the most to loose (though I wish they had been consistent about the order Britain/France/Germany are listed). (Oh, and it should be "UK" not "Britain".)

It also implies that the UK seems to make money out of borrowing at a low rate (UK being AAA), and then lending at a higehr rate (to Greece etc.)...

Your pentagonal diagrams at the bottom are excellent.

I agree with the other comments; the pentagrams are very nice. I have an idea and am curious to know what you think about it. At the moment the lines have two sizes: short if the countries share an edge on the pentagram, long if they don't. Would it be worthwhile to make the length of line proportional to the net amount?

The difference between "lent" and "owes" would suggest that ireland has the biggest problem. But the eye is drawn to Greece because of all red arrows.

If only I would have realized this earlier. I could have saved all the time I just put into making what I thought were some great-looking graphs.

JF: You identified a flaw in the graph... that the borrower and lender nations have different populations.
Here is the fix:
1) Fill the empty cells in the DEBT PER CAPITA table. Where you see a blank cell, fill in the correpondingly debt between the countries divided by the population of the lender. Say between Portugal (row) and Ireland (column), it would be 16.6 billion divided by 10.6 million (=$1566)
2) In plotting the chart, for each pentagon, use the number that has that country's population as the base (for both red and black lines). Because of this correction, the size of per-capita lending is not the same as that of the per-capita borrower for any given pair of countries. For example, the black line on the Portugal chart between Portugal and Ireland should be how much the average Portuguese lends to Ireland, which is $1566 rather than $3723 (and this is how much the average Irish borrows from Portugal).
I will fix the images above when I get the chance. Thanks for spotting the issue.

I like this solution. I had come to this conclusion, too, after deciding I had spent too much effort on making graphs to give it up.

(Also, I don't know why I said `pentagram' above instead of `pentagon'.)

Great analysis! Indeed Europe does have major economic issues and it's good to see it laid out so eloquently.

It would be useful to know the amounts "PIIGS" lended to France, UK and Germany i.e. how much of D, F and UK public debt is held by PIIGS