Reading this before the long weekend may save your life

Here's a chart that can save your life. 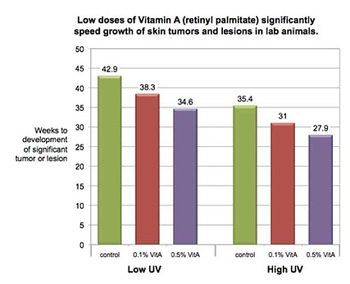 Here's my version (pretty much any such grouped column charts can be replaced by line charts): 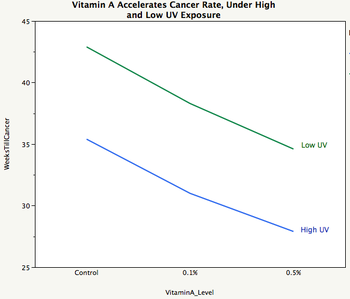 Anyhow, this data supposedly came from an FDA study, which the FDA has apparently now disowned, according to this AOL News report. Rats were used in this study, and the rate at which they developed significant tumor or lesion was measured. The graph illustrated a clear trend that the higher the doses of Vitamin A, the faster the rats developed cancer; this correlation was intact whether they were exposed to high or low levels of UV rays.

Notice that I switched the primary categorical axis to Vitamin A doses rather than high/low UV because the study concerned Vitamin A primarily, and levels of UV secondarily.

Using the Trifecta Checkup, we can see that they have the right questi

on, and the right data but a suboptimal chart. Also, the original chart fails the self-sufficiency test: no point in printing the data on top of the columns when there is a vertical scale.

How will this save your life?

Vitamin A is widely added to sunblocks -- not because they have any screening value -- but because they may slow aging of the skin. But the study found that Vitamin A actually partially nullifies the screening ability of sunblocks.

About half of the 500 most popular sunblocks sold in the U.S. contain Vitamin A and only 39 out of the 500 are deemed safe by the Environmental Working Group, which has compiled a database of these products. (There are several other potentially harmful ingredients.)

The FDA denied that such a study existed although the reporter as well as EWG have copies of it. If this study is authentic, the FDA knew about this perhaps ten years ago.

Reference: "Study: Many Sunscreens May Be Accelerating Cancer", Andrew Schneider, AOL News, May 24 2010.

PS. I should explain to my non-U.S. readers that the U.S. is celebrating Memorial Day, the beginning of summer, on Monday so lots of people are going to beaches and other vacations.

Thanks for the explanation, I wasn't sure why you had a long weekend.

More anti-Canadian bias - we just had our long weekend (Victoria day)! Do you wish us all to get skin cancer and die, or do you think we live in a land of snow and ice?
;-)

The only slightly "weird" thing about the line chart is the descending lines - maybe I've just been conditioned to see this as an improving trend. For some reason I want to see both the low weeks and the high Vit A occupying the upper quadrant. However, reverse scaling the time makes no sense, and would only confuse a reader. Can't think of a solve for this, it was just my immediate reaction when I was trying to see what you were charting.

I love your work in general but I definitely disagree with your overuse of lines. Lines emphasize the continuity between the units.

It is appropriate to criticize the use of columns for time series data (artificially making something continuous into discrete "time pockets") but I think there is some legitimacy for using discrete categories here. You could argue that there is some continuity but I would need to know more about the subject matter (I am admittedly not expert) to know if you can claim the "control" is the "0% Vitamin A" value. Even if it was continuous your scale then is wrong as the 0.5% value should be over 5 units from the origin (0%).

Also, the original chart correctly allows you make the natural comparison on the weeks scale. Yours, put not including the origin does not (I am sure you have heard this criticism before). Your chart makes it look like there is a lot more change than their is--this is a classic propaganda technique so I am surprised you are not more sensitive to it.

Again, I love your work and your analytic style but you are the one who created more problems than you (potentially) solved here.

I agree with floormaster about the use of lines. Commonly in drug tests the body's reaction to drugs isn't always linear, and testing with A and A+1 (and even with A+2) shouldn't be used to conclude A + 0.5 is halfway through the impact...

Brotherk: Good point. The idea of reversing the vertical axis did cross my mind briefly but I decided against it. Instead of artificially reversing the axis, I'd have preferred to find a metric that would have the property that larger is better. I'd hate to trade one unintuitive thing with another unintuitive thing (i.e. to have numbers declining moving up the vertical axis).

Floormaster: If you have been following the blog for a while, you'll observe that the bar chart brigade is not very far away. Every time I post a profile chart, there are a few comments saying it's an absolute no-no. One day now, I will convince some of you. I welcome the disagreement nonetheless.

This is not a matter of being in a brigade or not. It is a matter of clarity and accuracy. I may prefer bars or columns for a whole bunch of nonthematic/"irrational" (in truth, it is largely a preference born out of experience) reasons but that is not what my comment was about.

I apologize if I have not heard your argument for adding the continuity of a line (when there may not be any) but even if you use a line you have problems with scaling on both they horizontal axis (0.1% to 0.5%) and vertical axis (not including the origin exaggerates the change in weeks).

Plotting with depth below surface on the vertical axis -- so that numbers increase downwards -- is utterly standard in soil science, sedimentology, limnology (study of lakes) and oceanography. It's the way scientists see the data in every sense. And sure, everyone knows that it is not the response or outcome variable.

Skin cancer is becoming one of the biggest killers over here in the UK. surprising considering the weather! Luckily, more and more of our sunblocks appear to have Vit A added..