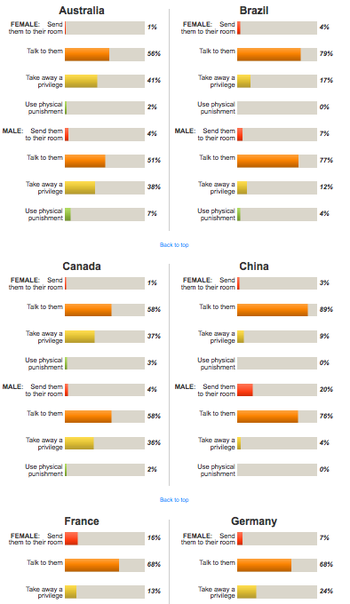 Reader Chris B. pointed us to this unfortunate chart, based on a one-question on-line poll conducted by Reader's Digest.

The data is highly structured: for each country, respondents, identified as male or female, are asked about their favorite methods to discipline their kids. (At first, I thought the "male" and "female" meant what methods they would apply to sons versus daughters but based on the summary paragraph, I now feel they refer to the genders of the respondents.)

The textual summary is extremely well-written, and successfully points to the most salient information (my italics and bolding):

Spare the rod, period. That's what parents across the globe told us when we asked how they discipline their children. Respondents in all 16 countries in this month's global survey picked a good talking-to as the best tactic for teaching a lesson, by a wide margin. Taking away a privilege placed second. Two other traditional forms of discipline-sending kids to their rooms and spanking-were the least favored choices in all but two countries. Among respondents who did favor physical punishment, men outnumbered women in every country except Canada, France, and India. Not a single woman in the United States expressed a preference for spanking.

Unfortunately, the graphical summary is a complete failure.

One feature plotting against the designer is that the general profiles of the responses are very similar between countries, and so the differences are well hidden inside this small-multiples display.

It also takes on an elongated form, making it almost impossible to compare the top two countries with the bottom two countries.

When data has such strong structure, it is a blessing to the chart designer. In the first chart, I made a set of profile charts, in small multiples. On average, parents everywhere act very similarly. There are some subtle differences: one common pattern, occurring in the Philippines, Malaysia, India, France, Brazil, etc., is the preference for a talking-to over all other methods; another pattern, applying to Netherlands, Spain, Australia, Canada, etc. is a talking-to, followed by taking away privileges with sparing use of the other two methods. 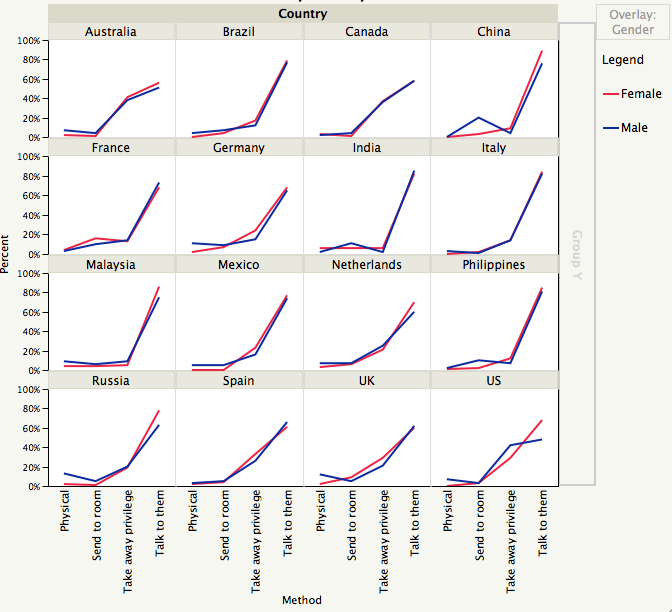 In some countries, like Australia, Brazil, Canada, Spain, Italy, etc., the gender of respondents mattered little but in the United States for instance, female respondents are more likely to prefer a talking-to while men liked using sticks.

Is it really the case that parents punish sons and daughters using the same methods? This poll seems to think so.

If we want to expose the minute differences at the level of country-gender, then something like this would do: 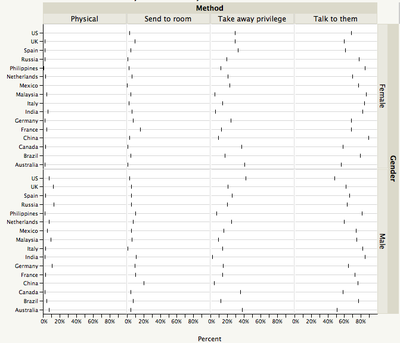 The purpose is to surface any outliers. I really can't say there are any here. The supposed reversion of responses by gender in India, France, and Canada is hardly worth noting since the physical punishment category is hardly used. (Reflection of reality, or response bias due to sensitive subject?)

Notice that these new charts do not have the data printed on them - the graphical elements are sufficient to show what the data is; readers are not auditors.

while I agree with your proposition for this dataset given its structure, I have a problem with the data proper. the question is which is the single best method of discipline. and the answers add up to 100%. but in a real-world situation, parents would talk first, then if ineffective, go for a harsher punishment, then eventually a third one. Apart from the psychotic fringe which doesn't represent 1% of the population, no one would beat their child before talking to them about what they did. another problem with that question is that it really suggests a "good" answer. Parents are tempted to report that they can solve all their problems with talking.
now AFAIK parents split into two categories, those who never use physical punishment ever, and those who accept it as a possibility. There is a strong geographic divide between the two (there was a recent post on strange maps about that)
If I were to investigate on the subject I would ask questions like "how often do you resort to " + various methods with possible answers including "systematically", "less than once a week", "less than once a month", ..., "never". the shape of the data would be very, very different!

I wonder why you chose line charts for your small multiples redesign, when the x axis is clearly a categorical variable. Bars would have been a better choice there.

Good discussion otherwise, though I think Jerome is spot on with his criticism of the source data.

Jerome: Agreed on the data. Their conceit was that these polls have only one question; that is probably why they didn't ask anything else. I'm most disturbed by the presumption that parents treat their sons and daughters with the same tactics.

Robert: With 4 bars in each of 16 charts, we have 64 bars in all, and that is just too much for readers to process, especially since the profiles of the responses are not that different. I have voiced frequently on this blog that I don't like or follow that particular rule. (See my posts on profile charts.) What is the advantage anyway of using bars instead of lines?

Okay, I agree that slavishly sticking to rules without questioning them is not always the right choice. But in this case, I think it would have made thing clearer. There is a lot of overplotting, so using grouped bars would have been easier to read.

I guess the lines work here because there is an order to the types of response, which vary right to left from least to most severe. I still think that bars are a better representation fro this type of data.

EagerEyes: I really don't like grouped bar charts because they make you literally and visually jump over barriers to compare data.

Andrew: Good point. I did think about the order but there are four data series, and I didn't think any particular order is more sensible. The profiles all look remarkably similar.

Online cash loans are becoming the new wave of the future and people are applying if only to establish themselves with these services in case of an emergency. So if you find yourself short of cash " Click Here