Political wordsmith (euphemism) Frank Luntz's presentation is all over the Web. I saw it on Business Insider. In the debate between words and numbers, Luntz obviously takes the side of words.

He used a few simple charts in the presentation, which is interesting by itself since he fundamentally is a words guy, not a numbers guy.

The charts, while simple, are very instructive: 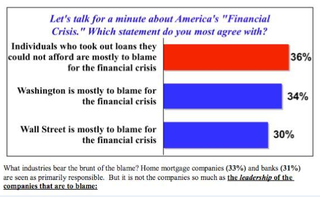 This bar chart sent me running to the maligned pie chart!  (Almost, read on).

While the total responses were almost evenly split between the three choices, the bar chart drew our attention to the first bar, which is inapt.

If plotted as a pie chart, I thought, the reader would see three almost equal slices. This effect occurs because we are much less precise at determining the areas of slices than the areas of bars.  Wouldn't that turn our usual advice on its head?

How the Bar Chart is Saved

The one thing that the pie chart has as a default that this bar chart doesn't is the upper bound.  Everything must add up to 100% in a circle but nothing forces the lengths of the bars to add up to anything.

We save the bar chart by making the horizontal axis stretch to 100% for each bar.  This new scaling makes the three bars appear almost equal in length, which is as it should be. 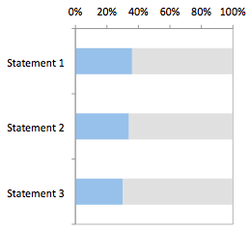 On the very next page, Luntz threw this pie at our faces: 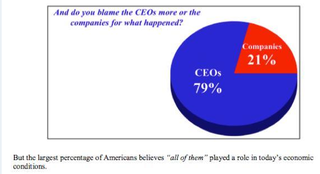 Make sure you read the sentence at the bottom.

It appears that he removed the largest group of responses, and then reweighted the CEO and Companies responses to add to 100%.

This procedure is always ill-advised - responders responded to the full set of choices, and if they were only given these two responses, they very well might have answered differently.

It also elevated secondary responses while dispensing with the primary response.

and isn't this one pie saying the opposite of the accompanying text?
http://www.businessinsider.com/frank-luntz-language-of-financial-reform-2010-4#-22