A reader doesn't get why the blogosphere is excited about this infographics on iPad data. He asks: spoof or magnum opus? (This I suspect was what drove Phil Gyford over the edge.)

Let me unbox this example of infographics. (I suspect those in this business are not loving this chart either.)

The section with three columns of pie charts is a classic example of almost-zero data-to-ink ratio, a la Tufte. This whole section contains a grand total of 15 data points; each pie has only one piece of information in it. The names of the competing tablet products are repeated three times, and take up more space than the data.

The titles of the three columns ("Purchase Intent", "Aided Awareness", "Researched Online") are technical jargon used by the market research community.. especially the first two. A footnote explaining what it means will help a lot.

It also fails my self-sufficiency test. The 15 data points are directly printed on the chart next to the 15 pies. Pick one!

And what a pity, there is an interesting story trying to come out from the clutter: 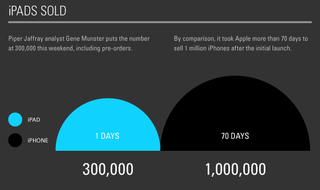 Moving on to the hemisphere section. Again, the data-ink ratio is zero (after rounding).

The only thing you can do with this pair of numbers is to figure out the average number of units sold per day. And even this is a silly idea because the rate of sales follows an exponential decay curve so the averaging over 70 days and comparing that to the first-day sales is essentially meaningless.

The puzzle concerns the relative sizes of the hemispheres. The ratio of the radii is approx. 1.46 to 1, which means the ratio of the areas is 2.14 to 1. I couldn't figure out which numbers give a ratio of 2.14 to 1. 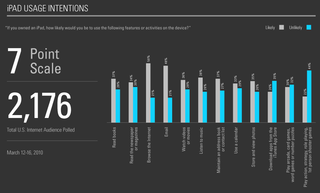 As for the paired column chart, it deserves a pass although whenever I see these, I want to replace them with two lines.

The amusing part of this section is the gigantic number 7 to let us know that survey respondents were asked to rate on a 7-point scale. In the meantime, the data on the chart say "Likely" and "Unlikely", and readers are left to ponder how these categories map to the 7-point scale.

It's also a riddle for readers to figure out how the usage categories were sorted.

One more while the night is young.

I must say, it is a good intention to try to make these otherwise dull statistics come to life for people. But the graphical constructs must be in the service of the data.

Device cannibalization: why leave out all but one data point?

App prices: these two data points do not comprise parts of a whole, why are they a pie chart?

US Map: circle diameter doesn't correspond to the data points... neither does circle area... so what is being shown here?

"The 15 data points are directly printed on the chart next to the 15 pies. Pick one!"

I don't understand this objection. You're saying that a table of plain numbers is an adequate substitute for a chart that shows those numbers visually?

hmm: Yes, if the reader of the chart must consult the table of plain numbers in order to make sense of the chart. This is true almost always of pie charts, and that's why you see that the data is printed right onto the chart. I call this failing the "self-sufficiency" test.