Junk Charts
Welcome Twitter About Book Blog RSS
Hoisted from the archives: a revolution
Light entertainment: the subway of riders

An enemy of the message

My friend Augustine F. pointed me to this "Chart of the Day" from Business Insider. He wasn't very impressed by it, and neither am I.

What should readers take away from this chart? The most notable feature is the sharp drop of the blue line paired with the essentially flat profile of the red line.  The blue line shows declining annual growth in R&D budget while the red line displays the R&D budget as a percent of revenues.

The budget as a proportion of revenues stayed about the same over the years so it appears that the blue line should roughly mirror the growth rate of revenues as a whole. Not sure what's the big deal.

According to the authors, this chart shows that Microsoft lost its mojo.  Specifically, they said:

With anti-trust issues in the rearview mirror, Microsoft is raising R&D spending.

It turns out the chart is an enemy of the message, not the messenger.

First, the 2005 fiscal year was the only one year in the entire chart in which R&D budget was reduced. In every other year, the budget increased. Second, the chosen scale for the red line makes it impossible to notice that the proportion stayed below 15% from 2004 to 2007. Moreover, one might argue that Microsoft raised its R&D budget during the dotcom years as the levels in 2004-7 did not appear excessively small if one takes the long view. 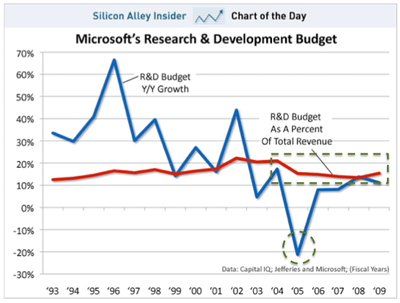 In any case, almost all the data on the chart was ignored in order to draw the mojo-losing conclusion.

Besides, both data series measure the budget, which is the purported cause of some effect, which is not shown.  Thus, the reader cannot relate this to a cause--effect relationship. How would we measure the output and quality of R&D?

The problem here is less with the format of the chart but with the message not being supported by the data.

Over-fancy -- YOY, % of revenue -- why not just plot R&D expenditure using the left-hand Y axis, revenue on the right, and show how the two $ amts move together except in 2005? Then they're both in the same units (though the scales would need to be different).

Oh, right, because that's not actually what happened. To your point, even in the reduced R&D year the % of rev was flat. The dollars-dollars thing would have shown this pretty clearly.

With this in mind, I guess what I don't understand is how the authors were able to plot the red line and not say, "Uhhh, wait a minute. They didn't stop researching, they just had less money overall." Is chart creation Rule #0 "Make sure you look at your own chart"? Can I nominate it?

My problem is that the units for the two lines are not teh same - one is just a plain percentage, the other is percent per year. Giving the same scale is meaningless, because it impleis that a 10% change in R&D is somehow the same as 10% of total budget.

I feel like % YOY chg is almost always trouble on a graph, and I think it's because you've already got an implicit YOY in the form of the x-axis. Like, that's *already* showing YOY change, so now you're going to show me YOY change in YOY change? That muted pop you just heard is my brain exploding.

It would be more clear to show two panels, one for Revenue $ and the other for R&D Budget $. Or one panel, with these dollar values normalized to 100 = '93 value.

The other quantities (YoY % change and % of Revenues) are derived from these, and in this case don't seem to tell the story.

i completely agree with the dollars-to-dollars comparison being a far better chart. i'm not sold on the need for an index as it wouldn't change the picture and introduces a layer of abstraction in the units.

really, what you want to see, i think, is budgeted R&D dollars vs total budgeted revenue -- because the company can directly control R&D but can only try to move revenue, if there was a huge spike (or dip) in revenue vs budget, that could move the relative % for R&D in spite of planning for no change at all.

It's only for PCs!