This chart, printed in the New York Times sports section, would be much more effective if turned on its side, and re-centered. The message of the chart is that the combined (or average) winning percentage of the New York basketball teams (Knicks, Nets) this season has been atrocious. 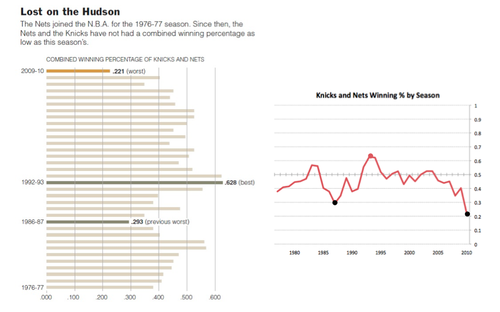 Dates going from bottom to top are jarring. Lines provide a much clearer picture than bars.

I agree with your version, altough strictly spoken it's not continuous data so you shouldnt use a line?

I don't understand where this idea originated from that you shouldn’t use a line. Strictly speaking, how many data sources do we graph that are continuous?

There's some discussion on this in a much-commented blog post of Jon Peltier’s at
http://peltiertech.com/WordPress/monthly-and-cumulative-spending-charts/

Here I was arguing with someone about this. He insisted that if data wasn't strictly continuous then you couldn't use a line. I pointed out that there’s quite a few famous graphical artists who don’t know it’s wrong to use a line graph for this kind of data, including:

In his book Now you see it, Stephen Few makes the point that sometimes lines and columns are interchangeable for the same data set, depending on what you most want to see. He uses a graph with months along the x axis, but it might as well be years as in the graph Kaiser posted above. He goes as far as saying Information visualisation software should [...] provide a means to rapidly and easily switch from one type of graph to another

He says that regular line graphs should only be used to connect values along an interval scale such as time, but he certainly doesn’t say that the data needs to be continuous.

Furthermore, he talks about gaining insight from Parallel Coordinate Plots, which definitely break the ‘continuous data’ rule. See an example at http://www.evl.uic.edu/aej/526/kyoung/Training-parallelcoordinate.html

A lne graph is certainly the right thing here, not least because point on the line between data points do have some meaning (e.g., the point half way betwene season 1 and season 2 could be taken to mean the average for the second half of sason 1 and the first half of season 2).