Explaining the appeal of certain graphs

Andrew points to the following graph by Adam Bonica as Exhibit A for a chart attracting popular attention but breaking Tufte-ish rules galore: 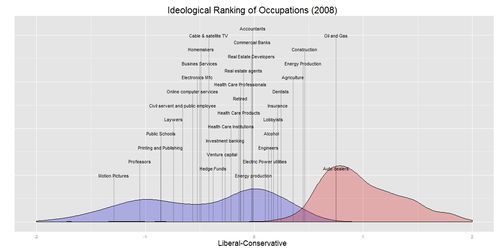 Andrew has provided a few pointers on his post, which I won't repeat here.

Instead, I'll point out some questions that come to mind when I look at this chart -- without help from the rest of the article Erik Voeten (who used Adam's chart) wrote, or any domain knowledge of this area of study.

How do you feel about this chart? Are you attracted to the visual or to the topic?

PS. Adam has put up a new version of the chart, reflecting some of Andrew's suggestions. He also explains that the vertical axis is related to campaign contributions.  Note that the bars plotted are 40th and 60th percentiles so the dispersion for some of these occupations are gigantic.

The apparent lesson here is not to publish a chart in such a way that it can be separated from its caption! Erik Voeten posted Adam Bonica's graph on The Monkey Cage blog without Bonica's accompanying explanation. The vertical lines mark ideological rankings of professions estimated from campaign contribution data, but the density plots describe the ideological distribution of Democrat and Republican candidates--blue and red, respectively. See Bonica's blog posts for details and improvements. (I'd link them here but the comment box isn't allowing me to paste.)

Non-U.S. readers may not understand blue vs. red. (could guess from liberal-conservative label or left-right orientation but why leave it to guessing?)

Actually, a non-US reader might guess red=socialist/communist, blue=conservative. That's the color association in most countries. I've always wondered why it's the other way around in the US!

1. I was going to ask what the Y scale represented. Thanks, Mmanti.

2. Cris - I have also often wondered why the US got the ideological colors backwards. Well, as they (used to) say, Better dead than Red!

If memory serves, on election night every four years, the TV stations used to alternate between red and blue in their maps for the two political parties. In 2000, the year of the Great Divide, the Republicans happened to be red and the Democrats blue, and the colors stuck in the public consciousness. To avoid confusion in 2004 and 2008 the TV stations stuck with these colors. At least, this is how I remember it. I'd happily be corrected. Blue is my favorite color, but not for political reasons!

More like the colors got stuck in the media's simple collective mind.

Intriguing. I think the second graph needs some work. The explanation is too long and puts me off reading it to understand what the graph shows.