Thank you for the terrific response to the book contest.  There were almost 900 entries, and the five lucky winners are: Dan Robertson, James Fiedler, Geoff Urland, Pawel G, and Robert Fowler.  Congratulations.

My heartfelt thanks to all of you for visiting the blog and joining the contest. Amazon recognized your enthusiasm by connecting a search for the title of my book to the "related search: Andrew Young".  Andrew Young was one of the choices in question 5 of the quiz.  (For those, perhaps overseas, who are not aware, Young is the former aide to former Presidential candidate John Edwards; he and his wife claimed to have private videotapes belonging to Edwards' mistress). This is a testament also to Amazon's data processing prowess. 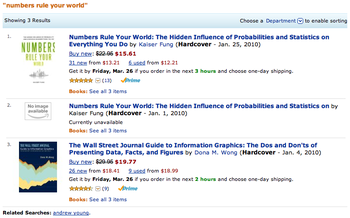 Early reviews on Amazon and Twitter of the book have been fantastic, and I'm confident getting my book won't be a waste of your money or time.

Signed copies are available from McNally Jackson bookstore in New York City. They also ship books within the U.S. Their number is (212) 274-1160.

Using the tools on Survey Monkey and JMP software, I delved into the data a little. Below are the proportion of entries picking each answer (in each case, the "crowd" picked the right answer):

Survey Monkey's results charts are nice and clean. Sensibly, they fixed the width of the bar charts regardless of the maximum data point. Thank you for no pie charts.

The following chart shows the distribution of eligible entries over time. (Eligible entries are those with 5 correct answers.) Of the 5 winners, 3 came from March 15, and 2 from March 9, which were the two days receiving the most entries. 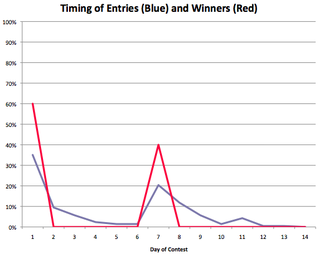 I used the point-and-click interface of JMP software to find the eligible entries. First, I created the histograms similar to those in Survey Monkey and shown above. JMP allows users to click on the bars to select (and deselect) data, so through a combination of clicks, I was able to isolate the rows (entries) that had all 5 correct answers. Then, using the Subset function, a new dataset is generated containing only the Eligible entries, from which I used the Random Sampling function to get the 5 winners. If you know what you're doing, it takes only 2 minutes.

Of course, the 2 minutes did not include the time spent exploring and cleaning the data. Some of the little things I found included:

There were 9 IP addresses that appeared twice. These people either came back to correct an earlier mistake, or share a computer with others, or just wanted to double their chances.

There were 7 entries with no email addresses, and I'm not sure why because there would be no way to notify them if they won.