Reader Jeff G. sent us to this post from Floating Sheep, which walks through an analysis showing which states have the highest beer consumption in the United States. Jeff is not amused by several of their maps. 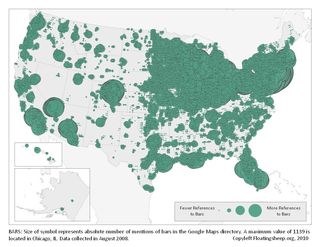 The first one utilizes overlapping bubbles, which is generally a bad idea but especially bad when the data is as dense as depicted here:

This is a great example to illustrate why the default use of maps for geographical data is sometimes misplaced. The greatest feature of this map (and many others) is the scarcity of data in the middle and the density around major city centers. This just tells us about the overall population density!

When we plot data on maps, we usually want to highlight something other than population density. 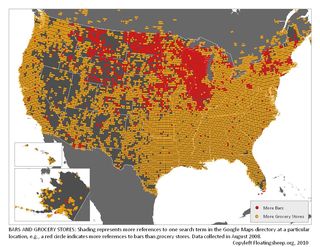 The second map, called the "beer belly of America", has circulated a bit on the Web. This is a case of throwing out too much data. It appears that the original data set contains the number of times bars and grocery stores were searched by location of Google Map users (two numbers per location). The plotted data consists only of whether bars or grocery stores were searched more, thus one bit (binary datum) per location.

Because of excessive data reduction, it appears that most of the country is a vast expanse of yellow. I'm sure if one goes back to the frequency of bar or grocery store searches, one will find that yellow comes in many shades.

While the maps are quite ugly, I like the way the website walks through their analysis process. I would say that their maps are less intended for final presentation as they are intended to aid exploration during the analysis. Indeed, at one point, they computed the number of bars per 10,000 residents (starting with North Dakota, 6.54), which is really the best way to summarize this information. It would be interesting to see this data plotted at the state level.

The map mentions "more references to one search term in the Google Maps directory at a particular location", so I think they are searching Google Maps for the number of bars and grocery stores directly, not counting the number of searches themselves. This would only be inaccurate if Google Maps fails to list one or the other for given areas.

Hi,
As one of the people responsible for the maps I appreciate the time and effort put into the critique. This kind of feedback helps us in our research.

But I also wanted to clear up some mis-understandings of the data and explain why we mapped the way we did.

1. The data we are mapping is not Google Map searches but as we stated on the maps, the "number of mentions of bars in the Google Maps directory". To be a bit more technical, it is the number of results that one got conducting a Google Maps query on the keyword "category:+Bar+&+Grills" (which was a Google defined category) in August 2008. This is the opposite of the user searches. The closest parallel is counting the number of listings for bars in yellowpages around the country.

So the data is an indicator of the distribution of the population of bars and grocery stores (defined as Google search term "category:+Grocery+Stores"). We stand by our assumption on this.

2. Overlapping bubbles and population. We selected this visualization as it highlights (albeit imperfectly), (1) the overall ubiquity of bars and (2) the concentration of bars in the Midwest. Bars are correlated with population (which is one thing we wanted to show) but there are also clearly places that are underrepresented (e.g., Los Angeles) and over represented (Wisconsin) relative to population. Since we are using point data we can't normalize the data by population (no available data source) but if we aggregate the points to the U.S. county level we see that the number of bars and population has a correlation of 0.34. In contrast, a indicator on the overall number of Google Maps listing has a correlation with population of 0.71.

Still, perhaps a bit difficult to interpret if one is not used to looking at data via maps.

3. The beer belly of America map does throw out a lot of data on one dimension (size) but this is in order to keep a lot of data on the dimension we are most interested in (location). We found this binary a useful visualization that took full advantage of the geographical variety we had (about 19,000 points in the U.S.). While we would have preferred to normalize the data by population this data is simply not available.

The are many shades of red or yellow in this data and this is clear when we aggregate the point data up to the county level (we prefer a lower level than state, again valuing geographic diversity). We just haven't made any maps of it as it essentially shows the same thing as the original map; albeit with more diversity along one dimension (shades of red and yellow indicating tendency towards bars or grocery stores) and less diversity along the other (3000 polygons rather than 19,000 points).

4. Ugly maps? Well I guess beauty is in the eye of the beholder. We think they're beautiful. :-)

Matthew: Thanks for the comment. I love hearing the decision making behind these charts. Sorry for mixing up searches versus directory entries. I do think a similar story applies - not all bars will register themselves on Google Maps -- but I agree that the bias is surely much smaller.

I'd encourage you to try aggregating the data to the state level on one dimension (say, the ratio of bars to grocery stores). That brings out your story better. It is painful to get rid of the 19,000 points since so much work went into it but as they say, art concealing art is the best. Cheers.

I agree the maps aren't very beautiful but I don't think it's easy to design something which is beautiful and at the same time easy to understand.

As for the map itself, the north have more bars...I live in France and it's the same