Elizabeth left a comment on a previous post, pointing to this NYT chart comparing this snow season with last on the East Coast. 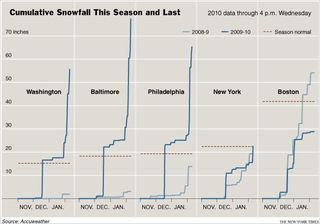 Quite a lot can be read from this small multiples chart of cumulative snowfall:

I find the placement of the city names odd. But the one thing keeping this a good chart, not a great chart, is the fumbling of the average. They need to plot the historical snowfall accumulation, not the total average snowfall.  As it is, the red line makes the unconvincing case that historically, the entire season's snow came in November.

The chart can be fixed by either turning the red lines into red dots at the end of the time window, or by plotting another series of staircase charts which can be directly contrasted with the blue lines. Best yet, plot the past 10 to 20 seasons' staircases in the background to show both the historical average and variance.

Can we please have a link to the NYTimes page? The link that you would expect to take you there (NYT) instead takes you to the decidedly less helpful list of all NYT-related posts.

Edward Tufte has long given examples of how to improve visual presentation. See for example: www.edwardtufte.com .