The graphs in this BBC article comparing several recent earthquakes hit us like aftershocks. This chart tries to inform us the size of the quake in China was by far the largest. (The Richter scale is a power scale.)

The spirals feel like the Austin Powers time machine, disorienting, and also distracting because the bubble chart uses the entire area of the circles to represent magnitude.  Try to guess what the relative amplitudes are before I disclose them below. (The red spiral for Italy was arbitrarily chosen as the index, with relative amplitude 1.) Bubbles are just horrible constructs, and for such a simple chart, they are worse than printing the data.

Amazingly, this is a double-axes bubble chart! The spirals hide the fact that the three gray circles are of different sizes, presumably color-coded to fit the "Strength" of the quakes.  The other axis is "Relative Amplitude" represented by the red circles. Even though the two metrics are on hugely different scales, both the gray circles and the red spirals were anchored off the Italy red spiral (area = 1).

The following junkart version, which places the three quakes relative to the underlying relationship between strength and amplitude, is more informative with less fuss. 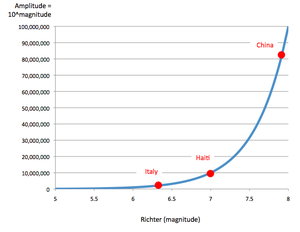 In the next chart, the Italians are shown to have no math skills (when in fact they have a strong tradition in math). How is it that 295 and 2000 have equal-sized bars? That's because the selected scale does not fit the data.

It's a mystery why Deaths and Injuries make friends while they ostracize the Homeless.  The three series (deaths, injuries and homeless) can be displayed separately.

A simple data table, with appropriate highlighting, gets this information across without the confusion.

This next chart is decent.  It is more effective if they make the Italy and Haiti blocks 20 across (same as the China blocks), stacking them one over the other. By doing so, the chart reduces to one dimension and we do not need to judge areas.

Overlapping non-concentric bubbles are also in need of rescue. Bubbles encode data in areas, areas are a square function of radii, the distance from the center to the circumference. When circles are not concentric, the centers do not coincide. This makes judging radii harder, which makes judging areas harder.

Look at Haiti vs. Italy. According to the printed data, the light gray area is about 60, which would be 40% of the dark gray circle. Who would have guessed? (I checked the areas, and indeed the Haiti area was 40% larger than the Italy area.)

By the way, in the first chart, the relative amplitudes were 40, 1 and 5.  Who would have guessed?


Andrew Gelman recently talked about good graphics being hard. Graphs are easy to make but hard to perfect. These examples show the need for care.

"In the next chart, the Italians are shown to have no math skills"

Don't you feel that the Deaths:Affected chart gets things backward? At first glance, it appears to the reader (or at least it did to me) that China has a lot *more* of something. However, isn't he point of the graphic that the Haiti quake was more lethal (rather than China having more survivorship, or something)?

Changing the measure to deaths per 10,000 affected would put Haiti at 667, Italy at 53, and China at 17. Here more deaths becomes a larger number, which seems to better make the point.

There's an excellent post here http://www.xocas.com/blog/?p=637 (mostly in Spanish) explaining how the magnitude of quakes translates into energy emitted and the amount of 'shake'. Includes some nice graphics.

Taf: Irony does not work very well in a blog post, as this shows. That's why I included the part in parentheses.

On an unrelated subject, whoever wrote the article seriously screwed up the estimate of the number of people left homeless by the Italian earthquake. Basic common sense should have suggested to him that a 6.3 earthquake that strikes in Italian backcountry almost 100 km to the nearest large city does NOT leave 1.5 million people homeless (it would have to level half of Rome for that ...) And, indeed, Wikipedia gives a much more reasonable estimate of 65 thousand.

Another interesting comparison is with the 1994 Northridge earthquake. That one was 6.7 and it struck directly underneath residential suburbs of Los Angeles. Nevertheless, there were fewer fatalities (estimated 60 to 70, vs. 300 in Italy), and it left fewer people homeless (estimated 25 to 40 thousand). The reason? Most likely the California building code, which requires houses to be able to withstand earthquakes.

I guessed 1, 4 and 30; given the difficulty in interpreting the graphs, I'll take that as a win.

Thanks so much for the constructive analysis of our recent feature ' Why did so many people die in Haiti's quake?' It is great to have people engage with our work. As a result of your comments we have simplified the top graphic to make the magnitudes of the quakes clearer - and thanks for spotting that we accidentally transposed the numbers made homeless in China and Italy. An error we have now corrected.

We have used red concentric circles to represent the quakes on the graphic because that is our house style for indicating the location of an earthquake on a locator map. So those familiar with our coverage will know it visually represents an earthquake radiating outwards - and I think others will understand this too, as it seems fairly intuitive.

On the BBC news site we try to make the visualisations appeal to users who are not statistics experts and who tend to switch off from pure line graphs and bar charts. It is also important for us to integrate the graphics with the text and tell a story that will engage and inform. Taken in its entirety we think the piece really does help readers to understand why so few were officially rescued and so many died in the Haiti quake, compared to the quake in China which was much more powerful and affected more people.

Incidentally, in case anyone is interested, the Richter scale is not generally used to measure large quakes now. The preferred measure by seismologists is the moment magnitude scale.

Scott and Bella: It's great to have you join the conversation! In terms of content, your article has great intentions and make good points about comparing the quakes. Getting rid of the grey (gray) circles definitely helps -- for my personal taste, I am not fond of bubble charts and so am not a fan of the house style.

Hi, what is the blocks chart called. does it have a graph-type-name ?? great site. thanks