Playthings in the unreal world 2

Reader Bill anticipated my next post, which is to use small multiples to explain the challenges of using relative scales.  Zbicyclist's point 1 is absolutely correct in the sense that the "model" uses the US$ as a standard, and only establishes "relative values".  That is true but does address the question I posed, which is: under this "model", a researcher cannot conclude that the US$ is over- or under-valued; in other words, it always must have the correct valuation.  Now, just like in other economic models, the theorist does not state explicitly the assumption that US$ cannot have over- or under-valuation.  It is just that the assumption of the US$ as a standard necessarily leads to the result that it is always correctly valued.

If we choose another currency, say the Euro, as the standard, then under that theory, the US$ can have over- or under-valuation.  However, now the Euro has been assumed to have the correct valuation.

The following charts show over (black) and under (white) valuation with different currencies as the standard: 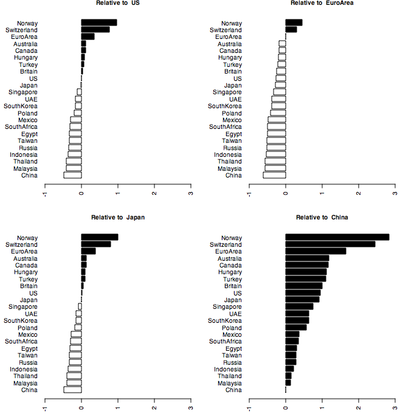 This is a pretty complicated issue.  The problem is that there are no external metric to measure value.

Note that I have revised my recommendation on what scale to use for the value axis based on zbicyclist's comments.  Since this chosen scale cannot attain values below -1, we should treat -1 as minimum value and use that as the left edge. (By the way, my scale multiplied by 100 is the Economist's scale.)

Also food for thought: should such a strange scale, allowing values between -1 and +infinity, be used?  Percentage scales often have the characteristic that a 20% increase and a 20% decrease are not merely a difference in direction but also in magnitude.  However, it is natural to assume that a 20% increase/decrease is different only in direction so such scales are misleading.  What's better?

Log scales would have invariant differences. They're the logical choice.

Economists are often trying to get around the problem when they talk about a "basket of goods". The basket is an artificial currency invented to avoid giving one currency the privilege of being the standard.

Chemists have resolved the problem by defining an absolute enthalpy of zero for every element in its "natural" state at standard temperature and pressure. So for oxygen, that's O2 gas, and for carbon, that's solid graphite, and so on. You can get any chemical combination from these starting points, but the starting points had to be arbitrarily assigned.

For this graph, maybe you could take the Big Mac as a basket of one good, and divide all the currencies by it. Now the dollar has a value in "Big Macs", that can change as the dollar price of Big Macs changes. I wonder why the economists who talk about the "Big Mac Index" bother to divide by the dollar, instead of doing that? Maybe they worry that if they don't put that extra layer of obfuscating calculation on, the absurdity of the whole "Big Mac Index" idea will be too obvious to all.

Thus a Chinese Big Mac costs 0.4 US Big Macs, rather than a rather abstract -0.6?

Ever thought of choosing a logarithmic scale? Such a scale makes ratios "shift invariant". I.e. a ratio of ten has always the same length. Therefore, the chart looks the same, no matter what you chose as "standard" currency, except for the location of the zero.

I agree with the comments recommending a log scale. I believe it is usually the right choice to use a log scale for fractional quantities (like percentages).