Playthings in an unreal world

It's been said that the economic models used by many mainstream economists this decade suffered from a fatal flaw: that of many unrealistic assumptions (such as no speculative bubbles) that are often needed to "make the math work"; sometimes, these are not direct assumptions but consequences of other assumptions.  See for example Willem Buiter, Paul Krugman, Scientific American.

Another favorite plaything of economists is the so-called "Big Mac index".  The Economist magazine, which seems to own this toy, proclaims it "the most accurate financial indicator to be based on a fast-food item", and the sub-title of the page is "Exchange-rate theory".  It is the cost in US$ of a Big Mac overseas divided by the cost of a Big Mac in the U.S., and is an indicator of whether the current foreign exchange rate (vs. US$) is over-valued or under-valued. 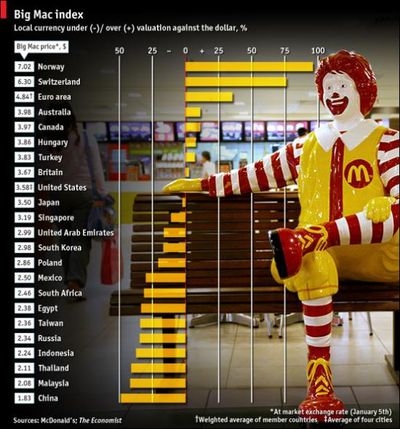 I saw this chart on the Business Insider site, where a claim is made about the Chinese currency being undervalued by 50%.

Sadly, the Economist has gone the way of USA Today in embellishing its graphics with distracting, loud, uninformative images.  Besides the chartjunk, we should always place the zero line in the middle of the chart for this sort of scale where the data could theoretically lean in either direction.  This allows readers to mentally judge the magnitude of the differentials. As pointed out by zbicylist, this statement isn't appropriate to this particular scale.  The scale chosen has the peculiar range of between -100% and +infinity: in order to help readers appreciate this, I would set the left edge of the scale to -100%, and let the right edge expand to cover the actual data.

Food for thought: could it be that under this economic "theory", the US$ can never be over- or under-valued, that it is always correctly valued?

1. Any country can be evaluated relative to any other country. The US is not always correctly valued, it's just the standard for the index.

Similarly, if we have a price index in which 1984=100, it's not that prices were perfect in 1984, it's just that you have to index relative to something.

3. Perhaps the price is so high in Norway because the alternative is a McLutefisk?

"the Economist has gone the way of USA Today in embellishing its graphics with distracting, loud, uninformative images"

Its clear in The Economist's case that the picture isn't meant to convey anything about the information being displayed. The Ronald McDonald picture is just a picture (that happens to be very, very near the chart). This isn't true for many examples from USA today. My question is: are pictures adorning articles always junk charts?

Anything we can do to make this kind of garbage less fun is a boon to society.

2) The choice of the US dollar is presumably because it's the world's reserve currency. So, yes, while this index will never show the over or under valuetion of the US dollar, it's a reasonable choice, and whichever currency you start from will always show 0 by default.

It would be fascinating to see small multiples of the "big mac index" chart using a few key countries' currencies as the baseline of the index.

The chart says "local currency under/over valuation against the US dollar".

Which is to say, it *does* claim that the resulting percentage is in proportion to whatever the over/undervaluation of the US dollar might be. Get off your high horse.

So, yes, the US dollar can be overvalued (and is compared to the Chinese yuan).

In general, and as is the case, if there are more and larger bars to the right of zero than to the left then the US currency is undervalued, and vice-versa. You might wish to weight the bars by each country's immportance, say in global trade or economic output.

Having zero in the middle wouldn't work. Norway's currency is nearly 100% overvalued against the dollar, but if you reversed it the dollar is only 50% undervalued. Maybe a log scale would convey this graphically more accurately?

Finally Economist charts have got more cluttered in recent years but I think - aside from it obliterating the US which I think unfortunately is deliberate - this isn't too bad.

I wouldn't call the Big Mac Index a "favorite plaything" among economists. It's just a bit of dry humor--a tongue-in-cheek price index over one item. It is not meant to be taken so seriously. Jeez.

"...under this economic "theory", the US$ can never be over- or under-valued..." Exactly so. The basis of this index is a product 'manufactured' in the US. Therefore it's price in US dollars is taken as the "correct" price, against which the others are compared.

My rule is "can I crop the picture out and only show the chart?" If yes, it's just nearby. If no, it's junking the chart up.