Stefan S. at the UNEP GEO Data Portal sent me some intriguing charts, made from data about the environment.  The following shows the amount of CO2 emissions by country, both in aggregate and per capita.  We looked at some of their other charts before.

These "inkblot" charts are visually appealing, and have some similarities with word clouds.  It's pretty easy to find the important pieces of data; and while in general we should not sort things alphabetically, here, as in word clouds, the alphabetical order is actually superior as it spaces out the important bits.  If these were sorted by size, we'll end up with all the big blots on top, and a bunch of narrow lines at the bottom - and it will look very ugly.

The chart also breaks another rule. Each inkblot is a mirror image about a horizontal line. This arrangement is akin to arranging a bar chart with the bars centered (this has been done before, here).  It works here because there is no meaningful zero point (put differently, many zero points) on the vertical scale, and the data is encoded in the height of each inkblot at any given time.

Breaking such a rule has an unintended negative.  The change over time within each country is obscured: the slope of the upper envelope now only contains half of the change, the other half exists in the lower envelope's slope.  Given that the more important goal is cross-country comparison, I think the tradeoff is reasonable. 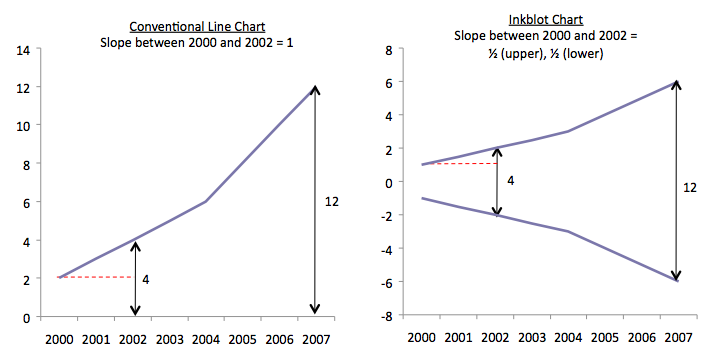 Colors are chosen to help readers shift left and right between the per capita data and the aggregate data.  Gridlines and labels are judicious.

As with other infographics, this chart does well to organize and expose interesting bits of data but doesn't address the next level of questions, such as why some countries contribute more pollution than others.

One suggestion: restrict the countries depicted to satisfy both rules (per capita emissions > 1000 kg AND total emissions > 10 million tonnes).  In this version, a country like Albania is found only on one chart but not the other.  This disrupts the shifting back and forth between the two charts.

Thanks for posting this. And yes indeed, comparison between "Per Capita" and "Total" for a selected country is not always possible. So, quickly put your idea into practice, which one can view as Image here or download as PDF.

Kaiser, I agree with you on the major drawback of having an accurate perception of the eovlution trend for a given element. I've tried to replicate it a business contexte but this led to more confusion than good.

Worth mentioning: Not only does it aid with composition but arranging the plots alphabetically also helps you to find specific countries' data easily.

For obvious reasons, data from Ukraine and Russian Federation and so on starts from nothing at around 1990 (and makes up quite a large chunk, particularly for the 'Total CO2 Emissions' side) leaving me to wonder what happened before then? There is no USSR/CCCP entry and 'Other' isn't huge before and suddenly shrinks after 1990 to compensate. It would be interesting to compare with China, for instance, as a similar communist state. I guess this kind of graph must help to show up such missing data?

Concerning data from "before 1990"... Data for that period do exist. But the graph lists only "official" countries. For some countries, interpolations (Czechoslovakia) can be done based on their share of population, presuming that the live standard (private, industry) was similar. But for the USSR with their many sub-states, this is hardly realistic.

One correction: "Colors are chosen to help readers shift left and right between the per capita data and the aggregate data." Colors represent actually the regions. Red for Asia & Pacific, Yellow for Africa etc.

I like this chart. Inkblots are different but very effective in the comparison sense.

One can now produce these graphs dynamically within the UNEP GEO Data Portal. Just select a variable of your choice and browse to the graph module, select the "Trends" option, and off you go. Here is an example.