Catherine Rampell ponticificated on the nature of working families in the NYT Economix blog recently.  Are both members of the family working?  Or not working? 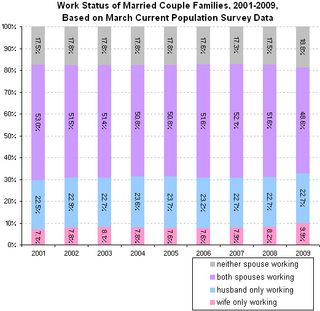 One thing is for sure.  Her chart just doesn't work.  Too many colors, unnecessary gridlines, should label the series directly in lieu of the legend.  Fails our self-sufficiency criterion: once every piece of data is printed on the chart via data labels, everything else is rendered redundant!

And the chart conveys the wrong message!  Looking at this chart, the reader would think the message is: the distribution of work status among married couple families has not changed materially between 2001 and 2009.  That is pretty much Rampell's conclusion.  She said that the gray bar moving from 17.5% to 18.8% in 2009 was "not a huge jump from year to year", and the the pink bar going from 8.2% to 9.9% in 2009 was a "slightly bigger increase".

This unfortunately paints the whole picture.  For a start, most stacked column charts can be replaced with line charts like this: 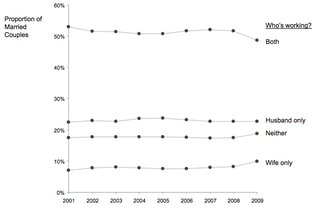 Because the vertical scale is no longer constrained at the upper end, the changes from year to year will appear more magnified in this version.  We may think some of the 2009 data to be different from the other 8 years, and we would be right.  Sometimes a small change is a big change - because the thing being measured just doesn't vary much.  The next chart highlights this: I went back to the raw data, expressed in the number of married couple families, and then created an index, with the 2003 count as 100 for each category.  The black line shows the underlying demographic growth in the total number of such families over the 9 years.  It's now obvious that there has been a pretty remarkable jump in families with only the wives working.

The difference between this chart and the other two charts is the choice of comparisons.  The first two purports to look for year-on-year changes; such comparisons are hard because how big a shift is to be considered noticeable?  In the last version, we regard as noticeable a growth curve over time that differs significantly from the underlying growth trend (black line).

More sophisticated statistical tests can also be used to establish whether the shift in distribution is "statistically significant" but I think the visualization is sufficient.

Great breakdown of the art of visualization. It's nice to see a results-focused breakdown of what function charts should provide. I was hoping that the links on self-sufficiency and data labels would bring me to a separate post or a glossary with a little more info about those terms, but it just links to the main blog. Do you have a resource or a separate take on those?

To me, it seems like the stacked bars are a more accurate representation of the data. The point she's getting across is "it hasn't changed much", which is obviously true. With the other graphs, you can't see how small the change is relative to the whole.

Trying to magnify tiny differences seems like something someone would use when they're intentionally trying to be misleading about the numbers.

Also, what's the margin of error?

Eric: Sufficiency is a topic that I discuss here quite a bit - how much does a chart depend on having all the data printed on it? Try imagining the chart without the data labels. Here's an old post about this topic that hasn't been tagged properly.

Omegatron: what the final chart shows is that the number of married couples in which only the wife works has grown 40% over this period while the total number of married couples has barely grown. I don't think any more sophisticated test is needed to see that the growth is important.
A different way to see this is to notice that between 2001-2008, the proportion of married couples with only the wife working was very stable at between 7.1%-8.2%, a range of about 1%, while the jump from 2008 to 2009 was almost 2% (from 8.2% to 9.9%). In absolute scale, a jump of 2% may be not noticeable but statistically, it is remarkable because the historical variation is so low.

The unstacked line chart is a large improvement over the stacked column chart.

I think the last chart is misleading. The total number of families is (nominally) fixed, so it's a zero sum game. If a family moves from "both working" to "wife only", there should really be the same change in both curves (except for sign). The normalized chart shows a jump in "wife only" of about six times that of "both working".

Jon: I'm not sure I understand what you mean by "nominally fixed". There is population growth over time so the number of married couples must be increasing. (The index is such that for each category, the 2001 value is fixed at 100. It's not a double index.) I agree that both versions will effectively show the same thing - it's the same data after all, it's the anchor point which differs.
Since we agree that the jump for wife only is drastic, a chart that brings this message out should be appropriately drastic!

The message seems to be that households are switchign from "both" to "wife-only".

Kaiser: The population growth is not as pronounced as the change in job status, and in any case this is normalized in both charts.

In the last line chart, you are tracking ratios. A loss of X% of 50% (both) results in a gain of X% of 10% (wife only), so the 'wife only' curve shows 5 times the amount of change. The additive nature of the data is obscured.

Jon: I agree with you and I think with the "index" chart a suitable chart title is neccessary. You visually suggest that the wife only is the biggest group. People tend to read a graph like this and jump to conclusions.
For this type of data a combination of (small) charts works better in my opinion. One for the size of the group and one for change.

The classic ugg are made from Genuine Grade A twin-faced sheepskin with suede heel guard.The unique qualities of the sheepskin mean that sand ugg boots will keep your feet warm in even the coldest of weather,but that if you wear them in summer they will not overheat your foot.With the shortest height in the classic collection,this ugg classic mini sand is perfect for year round wear.