Getting the Nobel wrong 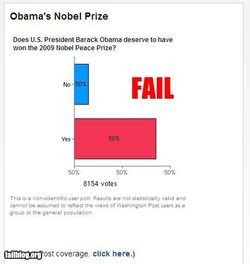 Why do we pay so much attention to seemingly inconsequential details of a chart's scale, colors, labels, etc.?

Here's why. (Reader Omegatron pointed us to the FAIL blog that captured this beauty.)

Notice the messed-up horizontal scale, in particular, the failure to start the axis at 0.  The result: the tiniest difference presented as a wide gulf.

The graph, published by the Washington Post, has since been fixed.  See here.  Nevertheless, the comments left by readers lent witness to the confusion.  I copied the first bunch that mentioned the graphical display - there were plenty of for-and-against-the-prize comments, many assuming that the poll result was as lop-sided as the chart seemed to indicate.

By starting at a base of 45% (as of this reading), your graphic grossly misrepresents the results of your poll. The "no" bar is four times as big as the "yes" bar, giving the visual impression that the vote must have gone 80-20 against Obama's Nobel. On the contrary, as of now the vote is 53-47 against. Whoever produced this graphic should re-read Edward Tufte's "The Visual Display of Quantitative Information."

Someone made comment that the graph is misleading, but it really isn't if you know how to read a graph.

This type of graph highlights the difference, not the complete number of votes and is appropriate when viewing percentages.

why is graph not drawn to scale? The vote is 51 - 49 no and the graph looks like an overwhelming number of "voters' said no

The graph is purposely designed to make it appear that there are a huge number of no votes and demonstrates obvious bias.

It is my understanding that the President did not "win", but was "awarded" the prize...much like a bonus given to you from your employer...deserving or not. In addition, I could not help but notice that after casting my vote, the graphic scale indicated 49% yes and 51% no; however, the graph lines seemed much more disproportionate for only a 2% spread with emphasis on “no”…

Why does the graph make the vote look so lopsided?

The graph is not lopsided .. the numbers are. Read the posts and you will see the posts are against the idea not for.

Who designed the bar graph? The difference between the "yes" votes and the "no" votes is two percentage points, yet the "no" bar is three times as long as the "yes" bar.

I'm amazed that you found that many rational comments. If nothing else it shows that Americans (I'm not) have got to the point where they can't debate anything rationally once it has a political spin.

As you know, there is no shortage of bar charts in print and online that violate the primary rule of bar charts. The primary rule is, all bar charts MUST have a zero-based axis. Bar charts are great because they allow us to compare the absolute difference between groups and you can't do an accurate comparison unless the baseline starts at zero.

If anyone can serve up an example of where this is not true, please show it here.

Big fail. (BTW Kaiser, this is my first comment, but your blog is one of my favorites.) I shared this amusing fail on an internal company work blog Thursday night.

Nitpicky point, but although their current version is improved, I wouldn't go quite so far as to call it "fixed," as I think there's still room for improvement.

John, I agree under most circumstances. Two possible exceptions I'd like to throw out:
(1) To show differences from a performance goal or standard, I think it's acceptable to set the goal as a new baseline and have bars going up and down from that new baseline. I think this can be especially useful if the differences between values are small compared to the absolute values, whereas a standard zero-baseline bar chart would be ineffective. This is almost equivalent to subtracting the goal from all values and plotting the differences, except it retains a sense of scale.
(2) For data that's a bit more ordinal than quantitative, zero may not be meaningful. An example I have in mind is a survey where the response choices are [1-strongly disagree, 2-somewhat disagree...5-strongly agree]. It may make sense to average results for each question, then plot these averages in a series of horizontal bars where the baseline is 3, and the bars go left and right...although I guess this is the same as assigning values -2 through 2 instead of 1 through 5.

It seems to me that there was a problem with some script making the chart and not some conscious decision to play with the scales.

Bill: you are absolutely right. Despite what some of the readers implied, this is unlikely to be conscious manipulation. A while ago, I had an example from Google Finance that also must have resulted from a bug in the computer script. And that's exactly why I cited the comments because an innocent mistake often is not interpreted as such.

Peter & John: good discussion. To synthesize what you're both saying, the important thing is to have a reference level. Oftentimes, this is the zero level. In the cases cited by Peter, it is not zero. In Peter's case(1), we should probably plot the differences from standard, thus still using zero as the baseline but having it in the middle of the chart, with positive values going right and negative going left.