A tale of four charts

Speaking of rules for making charts, I think the most important is "if at first you don't succeed, try, try and try again."  It's absolutely essential to produce multiple looks before settling on the one that helps tell the story.

While researching U.S. consumer credit this week, I came across these four views of presumably the same data set. 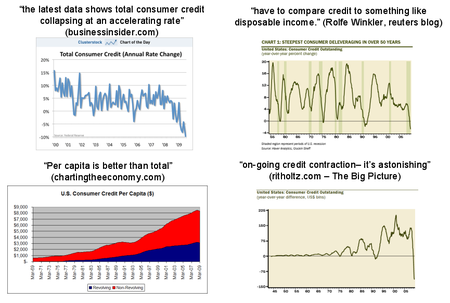 The chart on the top left (via Business Insider) shows a downward sloping line, with a steep decline on the right edge of the chart.  The authors clearly wanted to show us that consumer credit in the U.S. was collapsing.  The bottom was falling out.  To aid in this effort, they chose to:

(Thanks to Excel's default setting, we are treated to a centipede effect on the horizontal axis.  Also thick lines and line shadows.)

Readers who previously complained about my willingness to draw a line through things that shouldn't be connected will be none too amused by the use of a line chart to plot year-on-year changes.  Thus, the zig-zagging of the line represented the change of change, which has been dubbed the "second derivative" during a period when optimists used technical wizardry to show us "green shoots".  To read this chart properly, one should focus on the actual annual decline (the dots) rather than the line.

If one takes a longer-term view, as in the chart on the top right (via Rolfe Winkler), the recent drop in consumer credit can be put in perspective.  Since the 1960s, consumer credit has been positively exploding with few years of decline.  Note, again, that the falling line between 2000 and 2008 represented a slowing rate of growth, not a decline.  The question to ask is: after so many years of almost continuous growth, is the current correction such a big cause for alarm?

This situation of exploding growth followed by a slight correction is better visualized in the third chart (lower left, via chartingtheeconomy.com)  The author also answered a question asked by Rolfe, which is to compare the total consumer credit to the population, as he plotted the per-capita consumer credit.  An eyeball estimate tells us that consumer credit jumped by more than 800 percent since the 1970s, and the current retrenchment is a blip if we take a long view.  The explosion in consumer credit has no doubt enhanced wellbeing in the U.S. for decades; even though credit might well have been over-extended in the recent past, it is far from something evil.

The final chart (bottom right, via The Big Picture) should carry a health warning.  It really should not be shown by itself, or without comment.  Both charts on the right, in fact, came from the same presentation, by David Rosenberg.  This chart, not surprisingly, is the most dramatic -- the chart designer is going for the jugular.  The decline on the right side is much more exaggerated than in any of the other three.  The trick here is:

If this chart were to be believed, our focus should not be on the cliff-diving at the far right -- instead, the chart has the hallmark of a system getting completely out of control, and oscillating to oblivion.  One hopes that is not the message intended by its creator.

For anyone creating charts, it would be a great idea to have attempted all of these versions, and more.

When these charts say "credit", they mean "debt", right?

Good observation. It's credit from the bank's perspective, and debt from the customer's perspective. Think of it as mostly credit card debt. I believe most if not all of these charts exclude mortgage debt.

I agree and like this post, with the exception of "settling on the one." Often one is not enough.

But I think this post should be required reading for all statistics classes.

Excellent post, thank you very much. Will set it as required reading in our stats class. :)