Omegatron also did away with a set of cascading pie charts on Wikipedia, a particularly ineffective use of this chart type.  Whenever there are more than two or three categories, the necessary use of many colors can really make one's head spin.

Here, the cascade is being used like a log scale, to artificially elevate the small pieces, which unfortunately are also the least significant pieces of the energy pie.  There is no reason for nuclear, bio-mass, hydro and "others" to add to 100% except that the author decides to group them together.  The 41% nuclear or the 41% solar heating in the second and third charts, respectively, have no meaning in the larger context.

In deference to the original author, Omegatron's new version preserves the arbitrary three-level cascade.  He converts to stacked bar charts, which brings out the differences better. 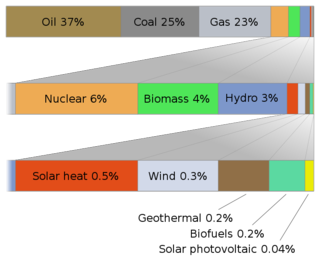 I'd prefer an even cleaner presentation with unstacked bar charts.  This can be done in either one chart with all eleven categories, or in two charts, as shown below.  The two-chart version assumes that the reader have two key questions: alternative energy sources as a proportion of the total, and the mix of different sources within the alternative category.

With the ordinary bar chart, many fewer colors are needed, and there is no need to print out each data point, nor a need to use guides to point to labels and data.  The trouble of the latter is its tendency to draw attention to the least important aspects of the data.

With this further example, I continue to find the Wikipedia rule to discourage text annotations on graphs bewildering.   Such a rule apparently does not apply to data labels, as can be seen here.  Of course, a graph without any labeling of categories is robbed of meaning but if labels can be saved, so should annotations!

But that's always the issue with the "new forms" of data visualizations: looking nicer versus making information more readable and understandable.

Although I am a great fan of these innovative data visualization forms, I still think that the data should be the focus of the graph. And honestly, the junkchart version (as you said, the link is missing between the two graphs) is much cleaner and easier to understand/compare.

By my reading, the English Wikipedia's Manual of Style proscribes the use images in place of text. For example, for a section header you should use the text "BIG HUGE HEADER" instead of using an image of fancy text (think MS Word's Word Art).

The English Wikipedia MoS appears to leave undefined the behavior of data-based images such as the graphs above and the plethora of maps available on Wikipedia, but the "discussions" page for the MoS clearly displays an expectation of text embedded within certain types of images. As we are admonished at the top of the project page: "Use common sense in applying it..."

What about using area or volume? I know the human eye tends to under estimate the difference between amounts displayed in area or volume, but maybe this be maybe less of a problem then the problems with using an exploded view?

Thanks for covering this!

I'm kind of operating under the principle that if you're showing relative percentages, you should be able to visually see how much each piece takes up of the whole. I want people viewing my chart to be able to see "Oh, ok, oil, coal, and gas make up about 85% of the total, and renewables are really really tiny." Plotting a "30%" bar so that it almost takes up the entire width of the chart doesn't really show that.

This is the same reason why I changed the abortion opinion poll chart to a stacked area instead of individual plots for each percentage, as it was originally:

I'm thinking that it conveys the overall picture better to show the individual percentages as part of a whole.

What if I had the entire bar at the top, and then made copies of the smaller pieces that were "dropped down" vertically with labels next to them?

Text in images:
There isn't a rule that prohibits text in images. Obviously my charts have text in them, so I'd be breaking the same rule I cited. I think there are two different issues here:

1. The main complaint is that there are no *labels* in the charts, right? I think this is not really necessary, since charts are going to appear in articles with a caption below them anyway, which describes what the chart is, so a label inside the image would be redundant. In an article, they'll have the description of what they show underneath the image:

And if you click to see the chart itself, a more detailed description appears on the image page:

The charts never appear naked by themselves, so I don't really see a need for a label inside the image with these other labels nearby.

2. There was a sort of "rule" discouraging text in images if it's easy and readable to put the information elsewhere. This was primarily to make it easier for others to translate and modify your charts, but may be out of date now. I can't find a single authoritative place where it's stated. It mostly applied to raster images (PNGs), because of the difficulty of photoshopping an image and changing the text if you don't have the original source files used to make it.

"Consider leaving text labels off the image to increase its use in multiple wikis (for example, put sections in different colours, and then in a caption/on the image description page, state what the colours stand for). Numbers are fairly neutral."

But now that we have SVG support, you can edit the text in the image very easily and re-upload it. All these charts I made are SVG images, so it's not really relevant.

Some still prefer to use numbered labels instead, so that it doesn't need to be translated into lots of different languages and re-uploaded for each one. The caption can just be changed instead:

"Note: Images with few labels should have the text removed and referencing numbers should be used instead."

Finally, the ultimate rule of Wikipedia is that there are no rules:

So if you think something should be done differently, you just do it and see if it survives the gauntlet of public opinion. :)