The New York Fed has put up some impressive infographics, depicting the credit conditions around the country. 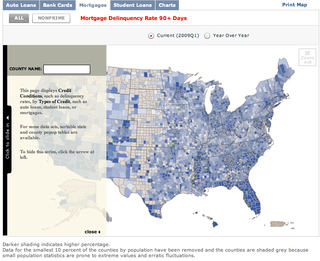 (I was going to praise the producers for this effort - a rarity among government sites but when I went back to the site today, I find that the graphic is loading only occasionally, and try as I might, I could not get rid of the big brown patch that obscures the West coast.  Hope you have better luck!)
As with similar maps, the unresolved problem is that the pattern is strongly dominated by the relative density of people around the country.  As we click through different maps, they all look similar.
But this map -- as do most infographics -- does well to put structure onto unwieldy, large data sets.  It acts as a table of contents to the data set.
Nick Rapp's team at AP produced this great chart on US life expectancy: 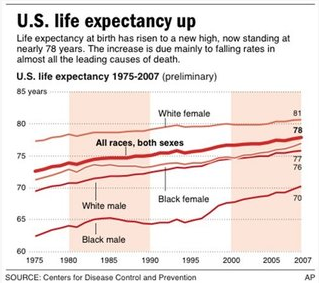 Very sensitive axis labels, putting the line labels into the chart (rather than in a legend box far away), showing only the current data, not every data point, subtle coloring to bring out the decades, etc.
I'm not sure about varying the thickness and tinge of the lines.  Is it necessary?  It hinders a bit as we try to compare the slopes of the lines.  Adding the initial data labels (for 1975) would also help us judge the net change over the period depicted.  If it is the change in life expectancy over time that is the main story, consider indicing all lines to the respective 1975 value.
Reference: "CDC says life expectancy in the US is up, deaths not", Miami Herald, Aug 19 2009.
PS. This is really an awful title for the article.  It reads as if something bad has happened to the death rate while something good happened to the life expectancy, as if there is a paradox but the article makes clear that the death rate declined, which would make the point redundant.

It would have been good if they had a second graph that normalised this data...then we could easily compare the trends.

Yes the initial data labels could even replace the current y-labels altogether. Might be aesthetically stronger.

I find the series labels are odd:

"White male" and "Black female" labels are closer to the "Black male" line than their own, and the "Black female" pointer seems to land at a point between two possible lines - why choose to do that at a part of the graph where two lines are so close?

I wonder if there is any way we could have graphically learned about the relative populations of these demographics. For instance, I note that the decade-long "black male" trough had no obvious impact on the overall average (or indeed correlation with the other 3 lines).

*That* appears to be the most interesting story in here: what happened for black males after 1984 that suddenly changed in 1997?