I finally checked the Junk Charts mailbox again, and I found an uprising against bubble charts and pie charts.   It appears that despite their shortcomings amply demonstrated here and elsewhere, editors everywhere continue to believe that the public has a lovefest with these creatures.

I will start off the parade with this one from the Wall Street Journal, purportedly showing that the Bank of England has continued to inject cash into the economy, and at ever increasing rates.  The headline said Bank of England to expand bond-buy plan.

This chart has a variety of problems, in addition to the use of overlapping bubbles.  As has been documented, it is almost impossible to gauge the relative sizes of circular areas, especially when they are overlapping.

If we remove all but one of the data labels, the chart is non-functional.  This is what we mean by not self-sufficient: the interpretation of this chart requires, indeed demands, that all the underlying data be printed on the same chart.  The only way readers can understand what is going on is by reading the data itself!

The horizontal axis (indicating time) is also non sensical.  The separation from month to month is variable.  Besides, and this is the key flaw of the chart, the projected number is a three-month total cumulative growth being treated like a monthly figure. 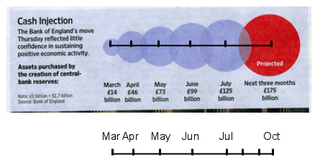 Since the Bank is projected to inject 175 50 billion extra pounds in the next three months, that would work out to be roughly 60 16 billion per month.  That would turn the story upside down: one would conclude that the Bank is gradually slowing the rate of injection.  The following bar chart points this out with little fuss: 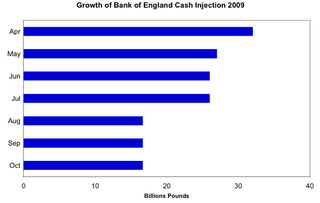 When bars are used, there is no need to print every single data point.  The relative lengths of the bars can be estimated easily.  The months are equally spaced.

One final point: the exchange rate cited is not very helpful.  What would have been more useful for readers would be the scale of the cash injection with respect to each nation's GDP.

PS. Per Andrew's comment, here is a line chart, where the growth/decline in the injection is encoded in the slope of the line segments: 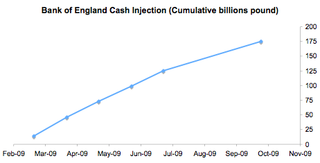 I think the total is cumulative, rather than monthly.

Brilliant. I see stuff like this every day, not only in newspapers and magazines, but in work produced by our company that goes to Wall Street.

Tom: I checked the article again, and indeed the data is the cumulative size of the program. I've replaced the bar chart with one focused on the growth of the program, which makes the point even clearer.

I recommend putting time on the x-axis (on the principle that you should always put time on the x-axis unless you have a good reason not to), and that it should be a line plot, not a bar chart. Also, why not start before April? But that last bit isn't your fault, you're just dealing with the data given to you.

Andrew: I added a line chart version per your specs