A world full of bubbles

As promised, we stick to bubbles.  Like the street artist blowing soap bubbles at passers-by, this map -- published in the Guardian (UK) -- is a gift of bubbles. 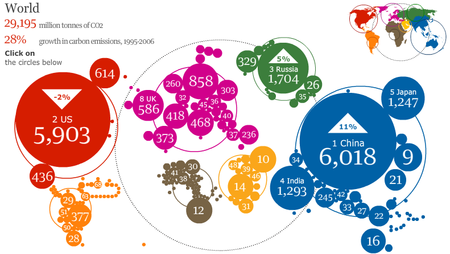 And our reader Frederic M. is not amused.  "A tremendous failure", he said.

In terms of conveying the data, a simple bar chart would do a better job in exposing the biggest polluters, as well as the relative magnitude between the biggies and the small fish.

The chart reveals more problems if one clicks on, say, Europe, and sees the following: 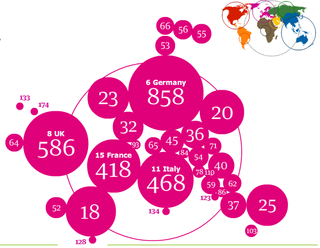 What they did was to print the ranks for every country, except the top four in Europe for which the ranks are placed next to the country name (in small font), and the actual amounts are placed in the middle of the bubbles.  The ranks, of course, are pretty useless, and they obliterate the scale of the differences between countries.

Besides, the bigger the polluter, the smaller the rank but the larger the bubble.  This built-in disconnect can also be disorienting.

Every bubble chart typically contains lots of data labels, and the reason is that the bubble form lacks self-sufficiency.  Without the data labels, the reader has trouble comparing the areas.

For a bubble nightmare, check this one out:
http://www.ismashphone.com/2009/08/a-visualized-look-at-the-estimated-revenues-of-the-top-cell-phone-manufacturers.html

The scales are totally off....::shudders::

You're absolutely right about labels and ranks.

But you're missing some advantages of the bubble chart. First, you can fit way more bubbles on a page than bars. Second, encoding via area means you can compare across a wider range of values. In this case there's the bonus that the resulting graphic is engaging to the eye and many people will recognize key bubbles without reading.

Here would be my challenge: try redesigning this as a bar chart, or series of bar charts. You might end up with something better for a data analyst, but I think you would probably end up agreeing that it would not work for a newspaper.

Anon:
Your first point I disagree with. You can fit a lot of bars on a page if they are sufficiently thin. Nor are bubbles space-saving unless one resorts to overlapping, and arbitrary packing.

Your second point is interesting. Using area is like using a square-root transformation, which is similar to using a log scale.

In terms of engaging the reader, it depends on what the reader is looking for. This type of graphic serves well as a table of contents to the underlying data, a well-produced catalog, but fails as a communications tool and could even mislead readers.

I have this graphic/map laying on my table for some time. I like it very much - saying that it is graphically appealing, which, indeed, does not tell too much about its usefulness...

One strong advantage I see that this "Cartogram" (a distorted map, in this case not keeping any similarity to the countries boundaries, but representing a value on the position on the map where the country can be found) reflects the view of the world from a cartographic perspective. As many people are used to see and work with world maps, it makes the "localization" of certain countries much more easier.

In this line we've developed a series of maps/visualizations, where the values have been replaced with the countries ISO codes. Although this has some drawbacks itself too, it looks really attractive. What do you think?

I have two points to make:
2) Magenta is important for color theory, but it can be pretty awful to look at. Can we propose a general ban on magenta in information graphics (the exception being graphics *about* the color magenta)
1) Shouldn't the axis-of-evil countries have their own special colors? maybe magenta!