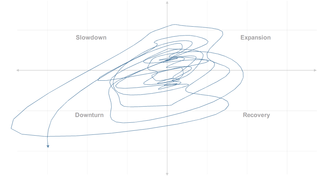 The New York Times (or maybe OECD) makes a chart about economic cycles look like, you guess it, cycles.  Don't really have too much to say about this one - except these two points:
If you have ideas of how to improve this, feel free to comment.
Reference: "Turning a corner?", New York Times, July 2 2009.

I think we'd all agree that if the underlying data has a known property, then using that in constructing the visualization can be powerful. For instance, if the data has a known large annual periodicity and you want to show the differences year to year, those differences become much clearer if you can some how take that annual periodicity out of the comparision; there are a number of ways to do that.

Trying to show cycles of non-fixed length in the data is an interesting problem. I don't know if the above succeeds, but it's at least interesting. If I understand it correctly, it's what in Physics we'd refer to as a type of phase-space diagram; plotting x vs the time derivative of x. These plots can be very powerful, but can be subtle even for experts to decipher. Here I think the message is at least moderately clear, but I agree, there needs to be some way of marking out a timeline, even just by colouring segments of the line. The interactive plot helps somewhat, but the past history is too faded out to be able to get context of historical swings when looking at the cycle being plotted.

Of course, trying to capture qualities of the data in the shopping mall example is just a category error...

How do we know it's a finished chart, and not just a blank set of axes that was stolen off someones desk and annoted by a small child?

If it is a valid chart, then great...I'm heartened that my 3 year old also knows how to produce a phase-space diagram.

(Unfortunately my 5 year old has moved beyond squiggles, and is now doing shopping mall charts. Oh well, she may not be a physisist in the making, but can still get a job at the NY Times)

"The pace of the current slowdown has levelled off, suggesting the economy may be close to that turning point" - GENIOUS!

I think this kind of cycle chart is fine as far as it goes, but first there should be a time series of the variables that make up X and Y in the cycle chart. You can see one series lagging behind, while getting an idea about the time scale of the cycle. The cycle chart itself can then be used to compare different cycles, knowing the time scales invovled.

I like the chart. I'm used to looking at this type of chart (with quantitative X and Y variables). In those cases, it has interesting implications for causal analysis -- see Crider? article in Marketing Science on this; contact me if you want a more specific reference. That's not the case here, but maybe I like this type of chart because I'm more used to it.

This is not a good chart, despite being done by Amanda Cox, who typically does excellent stuff.

I’m a big fan of quadrant charts. When done well they provide a visual shortcut for the reader by giving them 4 useful reference area. I’m also a fan of using animation when it helps the consumer of the information understand the message better than they would without animation. In this case however, I’ve run through the main slide about 10 times and I still don’t understand the story that it’s supposed to tell me. I’m not even sure that, as junkcharts.com mentioned (Jeff Weir?) in his post, that industrial production (output of manufacturing, miners, and utilities) trends are all that predictive of where the economy will go next. Some might say that unemployment, housing, consumer spending, or the price of oil are more important factors than industrial production trends in forecasting the economic future.

One of the major faults with this chart is that it's just too busy. There are annotations appearing as the line moves through time. There’s the year and month changing in the far upper right-hand side of the screen, and the line(s) making moves all over the place, as well as the quadrant label being bolded whenever the line enters it. It’s kind of like trying to watch two soccer matches at the same time on the same field—you just can’t keep track of who is doing what.

A better approach than animating these data would a series of tightly spaced charts, dashboard style. Such an approach would allow the reader to more easily compare each cycle against the other and see trends better than the animated approach. Because all the charts would be near each other in physical space, comparing and contrasting one against the other is made easier for the reader. And, perhaps, other variables could also be introduced to the dashboard, like the unemployment rate, consumer spending, housing values, etc.

Why not add time on another axis to make it into a 3D spiral chart... *ducks*

Interestingly I posted the same kind of data and visualization a couple of weeks ago on my blog for the german economy data.

I wonder how the turn will evolve ...

Without any time information it kind of stays a nice piece of art.

The validity of the chart obviously depends on the theory behind it. I don't think that makes the chart any worse. Within the premise of that theory (which is explained to a degree in the text surrounding it), the graph is highly informative.

While the animation delivers it pretty well, I agree that the static / single frame version needs to play up the time factor. A simple improvement to allow for that would be to cross the line with a little tick at every measured point in time (here every month).