A shocking failure to communicate

So said a reader, Stephen B., of the following graphic (note: pdf) in the London Times concerning Andy Murray's recent tennis triumphs. 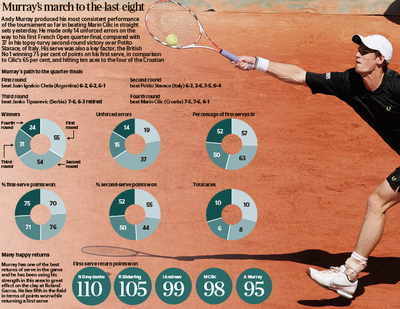 How can we disagree?  Shocking?  Yes.  Failure?  Definitely.  Failing to communicate?  No doubt.

Let's first start with the five tennis balls at the bottom.  It fails the self-sufficiency test.  It makes no difference whether the balls (bubbles) are the same size, or different sizes.  Readers will look at the data and ignore the bubbles.
Amazingly, the caption said that "Murray has one of the best returns of serve in the game."  And yet, the graphic showed the five players who were better than Murray, and nobody worse!  For those unfamiliar with tennis statistics, it does not provide any helpful statistics like averages, medians, etc. to help us understand the data.
But that is only the beginning.
Take a look at these two donuts.

(The color scheme from light to dark: first, second, third, fourth round of tournament)
So we're told: the 75% of first-serve points won in the fourth round was 25.6% of the sum of the percentages of first-serve points won from first to fourth rounds (75%+70%+71%+76%).  What does this mean?  Why should we care?
The challenge with these two statistics is that they are correlated and have to be interpreted together.  If a first-serve is won, then there would be no second serve, etc.  Here's one attempt at it, using statistics from the Soderling-Federer match.  It's clear that Federer was better on both serves.

And for a tennis ignoramous like me, how would I know whether 10 aces and 75% of first serve points one is good bad or average? At least I know he is 5th on the list of first serve return points one. But this stat is not a percentage, so he has a huge advantage over all but the 16 players which made the fourth round. And there are 8 players who won, so he might well be 5th out of 8 players who made the final 8 in this stat?

But then as the stat is dependant on number of first serves faced, it may have been better if he faced opponents who got a higher percent of first serves in. Or if he had played longer matches etc.