What are other graphics blogs talking about recently? 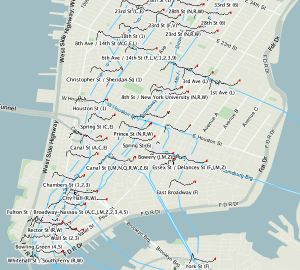 Okay but what about these sparklines would clarify that history?  From what I can tell, this is a case of making the chart and then making sense of it.

The chart designer did make a memorable comment in his blog entry: "Hammer in hand, I of course saw this spreadsheet as a bucket of nails."  The hammer is a piece of software he created; the nails, the data of trips taken.

One should fight grade inflation with an iron fist.  (Hat tip to Dean Malkiel at Princeton.)  A simple profile chart would work nicely since the focus is primarily on ranks.  The bubbles, as usual, add nothing to the chart, especially where one can create any kind of dramatic effect by scaling them differently. 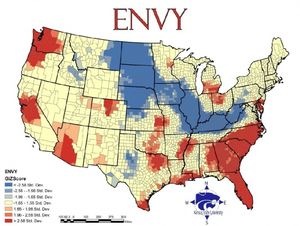 Nathan also pointed to the maps of the seven sins, which garnered some national attention.  This set of maps is a great illustration of the weakness of maps to study spatial distribution of anything that is highly correlated with population distribution.  Do cows have envy too?  See related discussion at the Gelman blog.

Liked this entry. I cut back on my blog subscriptions and appreciate your round up on topics of interest.