A particular genre of graphics is designed to induce awe: certain bits are allowed to stick out like a sore thumb.  Via reader Andre L., and an archive of US Army medical photos and illustrations: 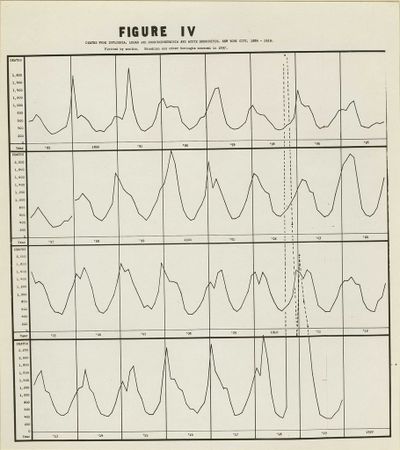 This is a small multiples graph designed to display the somewhat seasonal pattern of deaths due to influenza over years.  Basically, we see a U shape in almost every year; however, the height of the peak, and the timing of the peak shows quite a lot of variation.  Further, some years exhibit more of an L-shape than U-shape.
But the attention grabber here is the massive peak that occurred between 1918 and 1919.  It was unusual in many ways... it was the second big peak during 1918, it occurred late in the year and ellided with the next year's peak.  The designer allowed these two components to bleed into the other charts.
From the perspective of scale, readability, cleanliness, this bit sticks out like a sore thumb!  But one has to say it is effective.
A log scale is often used to deal with data containing such outliers.  But while this makes neater charts, the impact of the orders-of-magnitude difference is lost on the reader, except in her imagination.

I wonder if they would have gotten so creative in today's world of Excel charting...how do you make an Excel chart jump out of its boundaries like that? :)

I think it has more to do with the requirement that the figure fit on one page than some strange asthetic reason. In a digital world where we're no longer confined by the amount of space on a piece of paper there's simply no need for this degree of confusing finaggling.

Graphics may no longer need to be on paper, but they definitely still need to fit on a screen.

I have used charts where the data break out of the frame, and as soon as the audience realizes it's not a mistake, but a reflection of how crazy the real data actually are, it was a very powerful gimmick. Really got everyone sitting up and thinking.

Research in the delayed 90s found that sufferers were more sincere responding to healthcare concerns on the pc than they were to a person, in this situation the Physician. Including the AI element should enhance individual care.