The shackle of time 2

In the last post, we removed the time dimension in order to clarify certain aspects of the S&P 500 returns.  We found that with an investment horizon of five years, there was historically about a 25% chance of losing money and a 25% chance of more than doubling.

Even though we looked at cumulative returns, it was still the case that the data was serially correlated; in other words, it could be that the eventual return was not independent of the starting year of the five-year period.  To gauge this, we must return to the time dimension that was previously removed. 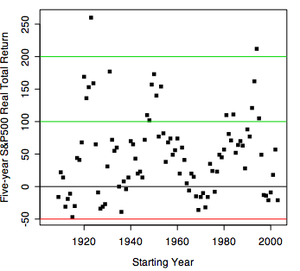 The chart on the right plots the five-year returns for all five-year periods starting from 1910.  What it shows is that even with longer time frames, timing or luck still plays a key role.

So the fact that we saw a 25% chance of doubling (or losing money) over history says much less about what might happen in the next 5 years than the simple number suggests.

In response to a reader's comment - the data series was described as "real total return" so these are inflation-adjusted.

I always find these graphs a bit misleading because a 100% increase balances with a 50% decrease. It would be nice to have a graph that was symmetrical about 0 in the case of zero return over time but it probably isn't possible.

A logarithmic scale on the vertical axis would do what you want. I think you can make a case for both ways of presenting the data though.

I thought you might find this graphic interesting: http://www.theatlantic.com/images/issues/200901/bush-map.gif