Junk Charts
Welcome Twitter About Book Blog RSS
The shackle of time 2
Popping the bubble, so to speak

Message to readers: I have a large backlog of reader suggestions.  Please be patient as I slowly get through them.  The frequency of posts will remain lower for the time being as I am busy finalizing a draft of a book.  More on that in the near future.

Matt H, a reader, sent in the following entry (with minor edits).

I saw a couple of bad charts on money.cnn.com and thought I'd submit them to you.

They're both part of the same feature on investment bargains caused by the recession.

Here are the links: 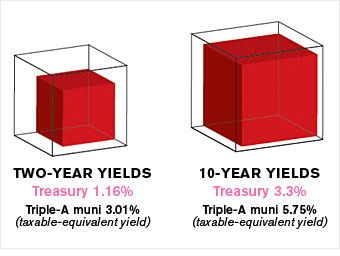 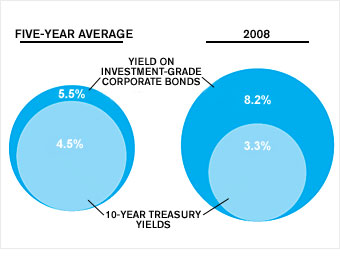 It seems to me like both charts would have made their points more eloquently by using a much simpler, more common form, like a bar chart.

In Chart A, cubes are used to display the difference between treasury bond yields and AAA municipal bond yields at the two-year horizon and the ten-year horizon.  The volume of each cube corresponds to the yield for the given type of bond in the given period (I think), which spreads the one dimension being compared (yields) across three dimensions, making the differences look smaller than they really are.

Time out.  Let me add that the inadvertent reference to an optical illusion concerning foreground and background!  The "outline only" cube on the left should have approximately the same volume as the "solid red" cube on the right (3.01% versus 3.30%)  and yet the red cube appeared quite a bit larger because our eyes reacted to the solid color more than thin outlines.

In Chart B, [...] Again, the metric in question is bond yields:  ten-year Treasury bond yields compared to investment-grade corporate bond yields.  The 2008 figure for each is shown alongside the five-year average.  This chart uses the area of a circle to express these yields, spreading the one-dimensional value across two dimensions.  As in Chart A, the result is a chart in which the difference between values does not appear as large as it actually is.

I will also send a simple bar chart version of each chart -- the bar charts should illustrate the differences in yields more effectively than the charts actually used in this article.

These are his revised charts:

We can do even better to convert the chart on the right to a time-series line chart.  Instead of the five-year average, it is better to display the gap beween treasury and corporate bonds for each of the five years plus 2008.  This should make for a more eye-catching graphic.

Let me be the first regular blog reader to ask for a free, autographed copy of your book.

Maybe I'll do a giveaway here. Will certainly do something for the readers, not sure what yet.

Why is it that so few people get the geometric effect of adding dimensions to a graphic: length vs area vs volume.

My critique here is not of the observer but rather the person putting the graphics together.