Jon's comment on the previous post pretty much anticipated this post.   The prior post concentrated on graphical matters.  However, the biggest issue with that chart is the choice of metrics.  If the idea is to explore the potential adverse effect of a sharp decline in endowment investment performance, then it is not clear why one should be comparing the proportion of endowment funds and the proportion of operating revenues paid for by endowment funds.  A missing element from these two series is the relative size of the budgets of these different departments. 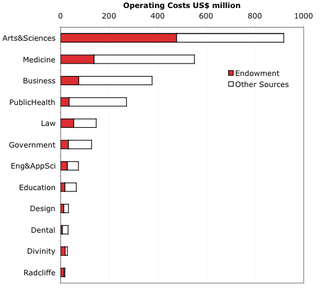 We can turn the ratio around and directly compute how much of the total amount of endowment funds distributed for operating costs is accounted for by each school.  This is really the simplest metric that gets to the question. 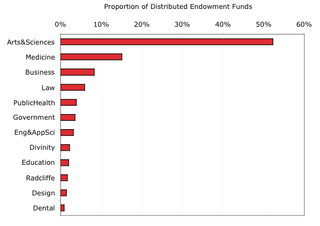 There are really two possible worries: for the School of Arts and Sciences, who pays for just about $1 billion costs with endowment funds, any significant reduction in distribution will leave a gaping hole; for a department like Radcliffe that pays for over 80% of its operating budget out of endowment funds, obviously a reduction in distribution can cause problems but we are talking about a base of $18 million rather than $1 billion.

PS. The first source did not contain any data on operating budgets so the first set of graphs (now replaced) did not show what I intended to show.  The new ones used the right data and had the right order of magnitude in terms of budgets ranging from millions to 1 billion.  The 2008 data are not available as of yet.

Your second chart here is "Proportion of Distributed Endowment Funds" while the first in the previous post is "Percent of Endowment Funds". I can't think what's really different in these two descriptions unless it's the word "distributed".

Is the older chart relating a percentage of the overall endowment? Does each school have a stake of the total amount?

If so, then a comparison of these two charts shows that the distribution to some schools is greater than the stakes those schools have.

On thinking this over, if I was an alum (which I'm not) I think I'd like to see two other charts showing percentage budgetary impact. One should show impact assuming an even reduction in funding, the other showing impact assuming that funding is reduced in proportion to their contribution to the endowment fund.

Jon: I am not quite sure what they mean by percent of endowment funds. I'm guessing this has to do with inputs to the endowment as opposed to outputs. Will have to read the financial report carefully to understand all this.

I can explain what I mean by percent of distributed endowment funds. Each school reports how much of their costs are covered by funds distributed from the endowment. Sum all those distributions across all schools to get the total amount distributed. Then figure out what proportion went to Arts and Sciences, Engineering, etc.

Also, I hate the description of "percent of operating revenues from endowment-income distributions" from the original chart. Not knowing much about university accounting, I'd think this just means how much of their operating costs are covered by the endowment distribution.

On second thought, I'm not sure I interpreted the charts in the financial report correctly relating to budgets. When I get a chance, I will revisit the calculation in the first chart above.