If you happened to be in a Starbucks recently, you might have picked up some charts, which was what happened to one of our regular readers and commentators, ZBicyclist, who then tried his hand at chart critique here.  He is worried they may reach millions soon.  So look out!

This graph on the right -- which should rightfully be called a "tree ring graph" -- seems to me a fantastic concept although it is hard to think of data that would deserve this treatment.  Certainly not the retail sales series plotted here!

This is an object lesson in why bubble charts often fail.

One issue is scale: note the awkward way in which the innermost ring is used to designate the oldest sales data of $375 billion presumably in 1996, and think about how you would decide where to place the 2007 ring.  (It's arbitrary.)

Another problem is labeling: when the growth is slow, the rings are close together, and labels have to be jittered (look at 2001 and 2002).  In this case, a relatively simple solution is to have the entire series of years run diagonally.

Yet another challenge is relative radii versus relative areas.  Inevitably, some readers will respond to the areas while others will respond to radii  ZBicyclist, for example, belongs to the first group while in this case, I find myself siding with the latter.  When the bubbles/rings overlap, it is difficult to assess areas.

Of course, a simple line chart would do the job with minimal fuss.  The following chart issued by the National Retail Federation actually plots the growth rates, rather than the annual sales. 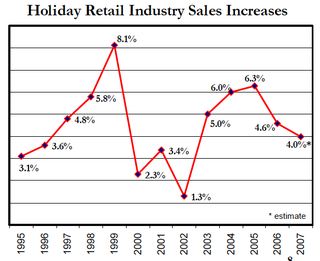 (Please lose the grid-lines, or else add a vertical axis and lose the data labels.  A column or dot chart is also slightly preferred.)

Now go read ZBicyclist's point of view.  In the meantime, let us know if you think of ways to use the tree ring graph.

Here are some good reading from other sites:

Harvard's Social Science Statistics blog reported on a talk by Amanda Cox of the New York Times graphics team, without whom this blog would lose a big source of inspiration.

Over at the Gelman blog, Aleks and Andrew discussed map-making, and as we often say here, picking the right things to plot is equally, or even more, important than what the graph looks like.

Some time ago, Andrew used a variety of graphs to look at the industry of predicting election results.

Dan Goldstein showed a graph that supposedly demonstrated the fallacy that we all think we are above average in the income distribution.   I find it interesting in a different way: it showed that people who are very wealthy or very poor know their "place" so to speak but people in the middle have a difficult time knowing where they stand, which seems logical to me.  Dan has previously written about graphs.

What other blogs are saying about us:

Infographics News: "You can agree or not with the author's point of view, but it's a good place to visit before making our next pie."

Opposed Systems Design: "This chart is just crying out for a Junk Charts treatment."

Decision Science News: they mentioned us in this post about Minard's Napoleon map, which Tufte considers the best graph ever.

Adam, who is the designer behind the Wired graphics special on "The Future of Food", asked about the rest of the series.  We previously made some comments on a set of mini donut charts.

The first thought that came to mind after browsing through all the charts was: what a great job they have done to generate interest in food data, which has no right to be entertaining.  Specifically, this is a list of things I appreciated: 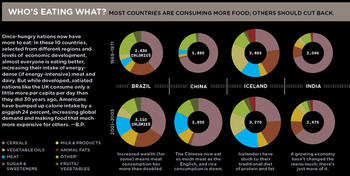 As a reader noted, this chart is essentially unreadable.  It contains data for the composition of diets in four countries during two time periods.

What might we want to learn from this data?

Are there major differences in diet between countries?

Within each country, are there changes in diet composition over the thirty years?

If there were changes in diet inside a country over time, did those reflect a worldwide trend or a trend specific to that country?

Unfortunately, the use of donut charts, albeit in small multiples, does not help the cause.  The added dimension of the size of the pies, used to display the total calories per person per day, serves little purpose.  Seriously, who out there is comparing the pie sizes rather than reading off the numbers in the donut holes if she wants to compare total calories?

This data set has much potential, and allows me to show, yet again, why I love "bumps charts".

Here is one take on it.  (Note that the closest data I found was for six different countries - China, Egypt, Mexico, South Africa, Philippines, India - and for different periods.) 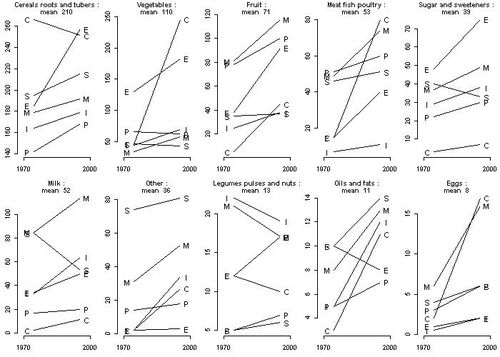 The set of small multiples recognizes that the comparison between 1970 and 2000 is paramount to the exercise.  There is a wealth of trends that can be pulled out of these charts.  For example, the Chinese and Egyptians take in much more vegetables than the people of the other countries; in particular, the Chinese increased the consumption of vegetables drastically in those 30 years. (top row, second from left)

Or perhaps, for sugars and sweetners, consumption has increased everywhere except for South Africa.  In addition, the Chinese eat a lot less sugars than the other peoples. (top row, right)

Egg consumption also shows an interesting pattern.  In 1970, the countries had similar levels but by 2000, Mexicans and the Chinese have outpaced the other countries. (bottom row, right)

These charts are very versatile.  The example shown above is not yet ready for publication.  The designer must now decide what are the key messages, and then can use color judiciously to draw the reader's attention to the relevant parts.

Also, some may not like the default scaling of the vertical axes. That can be easily fixed.

Finally, here is another take which focuses on countries rather than food groups.  We note that too many categories of foods make it hard to separate them. 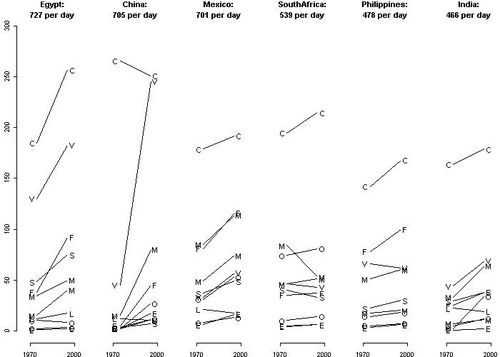