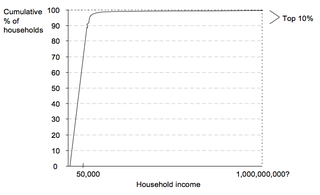 The skewness is the reason why the gini-coefficient is the only really good measure of income inequality. I therefor suggest 2: small-multiples: average income, and gini-coeffecients.

"Average within decile" would be silly, although it would at least let you graph meaningful statistics for the zeroth and tenth deciles, which otherwise amount to zero and infinity respectively.

Derek: that's exactly how I found out that the ticks were not decile boundaries. It just could not be possible that the highest income person in the US made 90k. One big problem with this graph is the lack of explanation of what it means by "decile"

derek,
As you say, I expect a bar to represent a range. The lowest would start at zero and the highest would extend to infinity (or near enough). You could eliminate the two extreme bars with no loss of information and just plot the middle eight. Less clutter.
But the Economist chart has nine bars, none of which go to zero or infinity.
The only sense I can make of it is the ten boundaries represent the average within decile. In which case the presence of the bars is very confusing. They represent the range between adjacent averages?
Better to plot just dots at the boundaries (or vertical ticks, since dots would be cluttered at the low end for Turkey and Mexico).
One could do cumulative distribution curves with the ten dots, but then it is harder to get 19 series on one chart.

Looks like an ideal dataset to illustrate with "density strips" - shaded strips with darkness related to probability density. These show the whole distribution with no need for tick marks - black in the middle and fading from grey to white in the tails. See my paper that's just come out in The American Statistician here .

Dave, Kaiser, you're right, there are nine bars and ten ticks, when there should be at most eight bars and nine ticks. I ought to have counted them before posting.

How bizarre. I wonder if this was done by someone on the Economist's payroll who'd seen such things but was "unclear on the concept"?

This is too hard to compare. I think Andreas is right -- they should at least have Gini coefficients.

that's the original graph from us.
It's certainly not the most obvious graph ever, but

Anyway. Economist, please give proper citation information. you know you should.

jcukier, I am SO LOST. I must be doing something simple wrong.

But I do not understand the numbers. I've transposed Turkey so I can post it here:

Obviously I'm misunderstanding SOMETHING, but I don't know what. If you see this message, and are feeling helpful, straighten me out.

ZB: Good catch. I cannot figure this out either.

I'm pretty sure that the numbers are the differences between the deciles.

I agree that there must be some kind of confusion with the data and its treatment in the Economist chart. Average of each decile, that's a bit tricky.

Chris J - Your paper is interesting, and I'll have to read it more closely later. "Displaying Uncertainty" is an interesting phrase. As you approach the ends of the shaded bars, it becomes more and more uncertain where the ends actually end. This is a complaint about the data bars in Excel 2007, which are not trying to show uncertainty, but in fact are supposed to represent known values.

The shading does seem pretty effective, though. I generally make cumulative distribution charts for my own consumption, but I'm reluctant to hand them to someone else. I usually have to explain them more than once, and then wonder if the other person really gets it.

Jon, have you ever thought of producing cumulative distribution charts as a waterfall chart, with a simple histogram bar graph underneath it for comparison? I have no idea if this will work well, as I just thought of it myself, but it seems as if the connection between a bar in the waterfall and a bar in the histogram would be intuitively obvious at a glance.

I did some cumulative distribution charts (I'll probably post them tomorrow). At first I made a histogram type chart, where the height of each bar was the cumulative total of the decile values in that country's data. This didn't allow useful comparisons. I imagine using floating bars to represent each decile's value would look fine for one set of data, but it also would not allow for effective comparisons.

I then assumed the decile value represented the mid percentile's value (i.e., I used the first decile's value for the 5th percentile) and continued my analysis with XY charts.

I've written up my own analysis of this data and posted it in How do you display a lopsided distribution?. I welcome any comments on my approach.

I posted a Boxplot version of the chart here :
http://sparklines-excel.blogspot.com/

Some info on the different deciles is lost in the process but the chart is easier to read.

ZBicyclist, I got it.
the table on the 2nd tab is what has been used to make the graph. Since it is a "stacked column" chart, then all the values are not absolute values, but correspond to the height of the bar. i.e. the value called P20 is really "P20-P10".